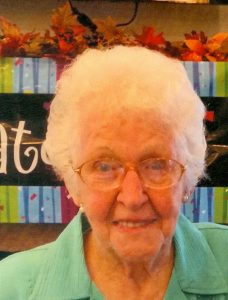 She graduated from Massillon Washington High School and was a homemaker.  She enjoyed camping, traveling, watching football, especially Ohio State, and visiting with her grandchildren and great-grandchildren.  She was a member of Chapel of the Cross United Methodist Church in North Lawrence.

In addition to her husband, she was preceded in death by her parents and a brother.

Services will be held at Chapel of the Cross United Methodist Church in North Lawrence, on Wednesday, December 11, 2019, at 11:00 a.m. with Rev. Robert Mitchell officiating.  Burial will follow in the Newmans Creek Cemetery.

Friends may call at the church on Wednesday from 10:00 to 11:00 a.m. prior to the funeral service

Memorial contributions may be made to Chapel of the Cross United Methodist Church, 14411 Orrville St. NW, North Lawrence, OH 44666