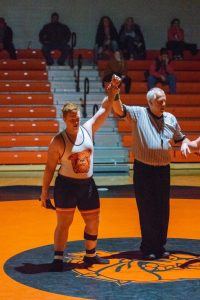 With an eye on the tournament run at the end of February, Dalton’s Head Wrestling Coach Kenton Lemon says his wrestlers are “closing the gap.”

“We wrestled very well this evening,” Lemon said. “We had two huge pins out of Austin Ryder and Myron Miller for the go ahead and then the win. We have to come to work every day and continue to get better. Our young guys are one or two moves from winning the matches that they are getting beat in. I think we gave great effort tonight and even though some of the matches didn’t go our way we wrestled very tough. We have to continue to work on finishing matches.”

“I told our guys walking into this weekend, we need to focus on our individual matches and let the team scores sort themselves out,” Lemon said. “Individually we wrestled pretty well. We had a few disappointing matches and as coaches we just keep going back to the fundamentals of the sport with technique and conditioning. I told our guys that we aren’t there yet, but we are closing the gap. We have a really strong December and January schedule in preparation for the tournament run at the end of February. We have our mind right in regards to the intangibles of attitude and effort. We have to continue carrying over the corrections that we are making to our technique in practice into our competitions.”