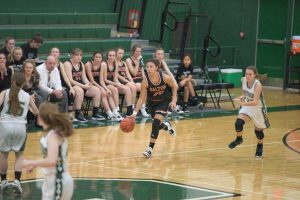 Makenna Geiser is having a senior season to remember. It seems like each game is a showcase of her talents and this week was no different. She helped lead Dalton High School’s girls varsity basketball team to victories over Norton and Smithville. The Lady Dawgs now have an overall record of 9-1 and a WCAL record of 5-0.

Dalton’s head coach Katie Miller noted what her team did well against the Panthers. “Our team did a great job containing their guards,” she said. “We were very good in transition on both ends of the floor. Norton tries to force you into early turnovers and we really did a nice job taking care of the basketball. It was a good team win.”

Geiser exploded for 29 points in Dalton’s win over Smithville Dec. 28. Although this is already an impressive accomplishment, it was even more jaw-dropping that she scored the same amount as the whole Smithville team. Dalton won 43-29. Geiser was not just swishing the ball through the hoop. She also pulled nine rebounds and found her teammates for two assists.
Geiser is a team player who is willing to do what needs done for a win.

“Playing back-to-back days is never easy for any team, but we knew Saturday was a huge game for us,” she said. “I just wanted to come out and set the tone by pushing the ball and being aggressive. Whatever I can do to get the ‘W,’ I’ll do it.”

Miller also mentioned Geiser’s performance. “Makenna had an incredible game,” she said. “Makenna continues to get better each week. She is a very talented basketball player.”

Miller highlighted her team’s strengths in the win. “We defensively had a solid performance all around,” she said. “We rebounded the basketball better in the second half. We thought the team did a great job just continuing to work on both ends of the floor for 32 minutes. We must continue to get better each week. Great league road win for our team.”

Lady Dawgs ready to step up their game