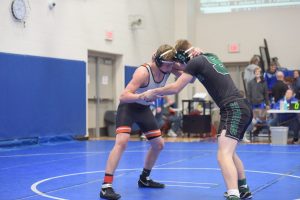 DGKN staff report
The Bulldogs varsity wrestling team battled through some tough matches in a “tough tournament” Saturday at the Chippewa Invitational, according to Head Wrestling Coach Kenton Lemon.
Dalton finished fifth out of 15 teams.
First place: Tate Geiser; second, Austin Ryder and Xavier Munsey; third, Eric Miller; fourth, Sean Geiser and Myron Miller; and sixth, Branyan Zaleski and Tristian McCourt.
“We wrestled well for the first few rounds, but our intensity dropped off at the end of the day when it really counted,” Lemon said. “I’m really proud of my guys for battling through some really tough matches in a tough tournament. The one big takeaway we get from this tournament is that we have to work on finishing matches when we get the opportunity.”