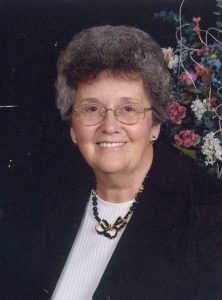 Jeridth was born on September 3, 1934, in Butler, Ohio, to the late Donald and Virginia (Rudolph) Hess and graduated from Rittman High School.  She married Donald Ray Forrer and they celebrated over 60 years of marriage.

She was a homemaker and provided housekeeping for other people for several years.

She was preceded in death by a sister, Joan Brillhart; and a brother, Trent D. Hess.

Private services will be held at St. Michael’s Lutheran Church, at the convenience of the family, with Pastor Lucas Merritt officiating. Burial of ashes will take place at the St. Michael’s Cemetery.

Memorials may be made to Ohio’s Hospice Lifecare, 1900 Akron Road, Wooster, OH, 44691 www.lifecarehospice.org.

Auble Funeral Home in Orrville is assisting the family. Online registry and expressions of condolence may be made at the funeral home’s web site at www.aublefuneralhome.com.