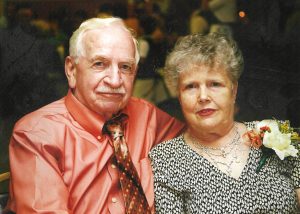 “Together Again”
James V. Fahrni, 82, of Tuscarawas Township, died unexpectedly on Tuesday, January 14, 2020 at his home.
He was born near West Lebanon on June 12, 1937 to the late Nicklaus and Laura (Kamph) Fahrni and married Doris A. Green on March 10, 1956.  She died November 1, 2010.
Jim graduated from Dalton High School and retired from Fagens Building Center.  In his earlier years, he enjoyed camping and waterskiing  He enjoyed the outdoors and was an avid hunter and collector of arrowheads and broadheads.  He also enjoyed taking his vintage army Jeep to local car shows and following Tuslaw athletics.
Most of all, Jim was a people person.  If he met you, he was your friend.  He enjoyed visiting with others and spending time with his family.
He is survived by a daughter, Michele (Jerry) Speicher of Dalton; grandchildren, Megan (Michael) Mullet of Winesburg and Brandon (Tiffany) Speicher of Navarre; great grandchildren, Elias, Madison, Emma and one on the way; and brothers, Daniel (Donna) Fahrni of Hiram and Raymond (Natalie) Fahrni of Apple Creek.
In addition to his parents and wife, he was preceded in death by a son, Michael; sisters, Freda Sword, Emma Stocksdale, Betty Cowhick, Edna Reed and Martha Sallo; brothers, Carl, Glenn, Marion and Albert; and his beloved dog Shotsie.
Funeral services will be held on Saturday, January 18th at 11:00 AM at the Spidell Funeral Home in Mount Eaton with Pastor Mark Hirst officiating.  Burial will follow in the Westlawn Cemetery in Mount Eaton.  Friends may call on Friday, January 17th from 6-8 PM at the funeral home.
Spidell – Mount Eaton