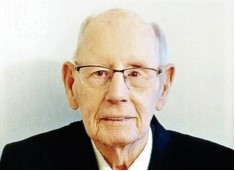 Joe was born on June 8, 1922, in Orrville, to the late Raymond and Stella (Shearer) Carney, and graduated from Orrville High School in 1940.  He received a scholarship to play football at Akron University and was team captain in his final season.  After serving as a sergeant in the US Army Infantry during WWII, he returned to college and graduated with a Bachelor of Science degree in 1948.  He married Julia Durnak (Jay) on August 7, 1948, in Akron, Ohio.  She passed away in 2008, just 10 days before their 60th anniversary.

He worked for Goodyear in Akron, Topeka, KS, Tyler, TX, Freeport, IL and Gadsden, AL, before retiring to California for 20 years.  Before transferring from Akron to Topeka, he built their first home almost entirely by himself in Tallmadge.

Joe was a member of The American Legion and The Veterans of Foreign Wars. He was inducted into the Orrville High School Sports Hall of Fame in 1995.  He enjoyed golf, fishing. woodworking and traveling, having visited all 50 states, Canada, Mexico, several Caribbean islands and Ireland. He attended First Presbyterian Church.

In addition to his wife, Jay, he was preceded in death by daughter, Jolene Carney, sisters, Lona Studer, Kathleen Mollohan, and Faye Ann Carney, and great grandson, Wyatt Carney.

Services will be held at 11:00 am on Saturday, at the funeral home, with Rev. Dr. O. Kenneth Walther officiating. Burial will take place at the Crown Hill Cemetery in Orrville, where military rites will be observed.