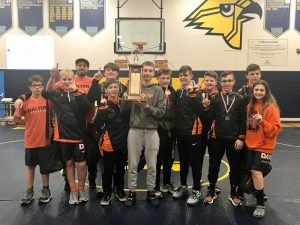 For the first time in school history, the Dalton Junior High wrestling team won the Wayne County Athletic League tournament championship Saturday.  It took a top-4 placement of every starting wrestler to secure the victory as Dalton won only after the final match of the day, according to information provided by Jason Boyer.