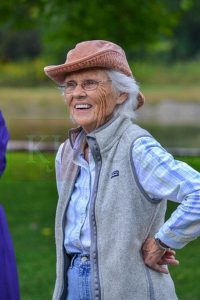 Pauline Fair Kasserman, 88, known affectionately by relatives as “Widge”, passed away peacefully on January 30th at her beloved home in Winesburg, Ohio after a brief illness.

She was born Pauline Ruth Fair on April 21, 1931, to Paul Revere Fair and Bula Pfouts Fair in Navarre, Ohio. The fifth of six children, she was the last surviving member of the family.

Pauline graduated from Navarre High School (now Fairless) in 1948 and from Aultman Hospital School of Nursing in Canton in 1951. She worked as a surgical nurse specializing in ophthalmologic surgery at Aultman Hospital, where she met her future husband, Walter Kasserman, MD, a surgeon, whom she married in 1955. Not long after marrying, she retired from nursing to focus on raising her family in North Canton, though continued to be involved in health care through her service to organizations such as Planned Parenthood and The United Way.

Pauline developed a love for early American antiques and architecture through her neighbor and friend, the late Ellie Hoover Walker. They established The Pepper Tree antique shop in North Canton and travelled throughout the region together dealing in antiques for a number of years. In the late 1960s, Pauline and her husband purchased a farm property near Winesburg, Ohio and ultimately moved there once they became empty nesters. The farmhouse and other buildings on the property were a longtime labor of love that gave Pauline a way to continue to channel her abiding passion for all things early American. A lover of nature and animals, Pauline devoted much of her time to gardening, caring for her cherished pets and farm animals, and birding, the latter of which led her to establish bluebird trails on the property. In her later years, Pauline renovated a building in Winesburg, converting it to an inn that she named The Stone Cottage and operated for several years. She was also actively involved in The Winesburg Ohio Historical Society as a lifelong member and served as its treasurer for a period of time.

Pauline was preceded in death by her parents, her husband, Walter, and siblings, Dorothy McAfee, Myra Dutton, Lee Fair, Wanda Brechbuhler and Paul “Jerry” Fair. She is survived by her son, David, daughters Jane and Ann (Michael) Rodgers, two grandchildren, Sam and Austin, and several nieces and nephews.

Family graveside services were held at the Foxfield Preserve on January 31st,. Spidell Funeral Home handled the arrangements. A memorial service will be scheduled at a later date.

The family would like to extend heartfelt gratitude to Pauline’s “right arm” and friend, Gladys Mullet, for her many years of service and devotion, including countless hours she gave to caring for Pauline as her health declined. Special thanks also to Visiting Angels of Canton and Ohio LifeCare Hospice of Wooster.

Among her many qualities, Pauline will be remembered for her zest for life, independent spirit, kindness and generosity, all of which inspired so many who had the fortune to be a part of her life and who will miss her dearly.