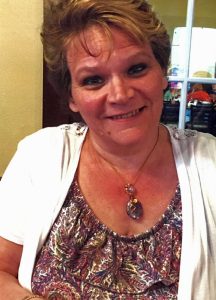 Bobbie Jo (Friday) Mullet, 55, of Mount Eaton, passed away on Sunday, February 2, 2020 at LifeCare Hospice in Wooster following a courageous battle with A.L.S.

She was born in Wooster on June 20, 1964 to Charles and Virginia Friday and was a 1983 graduate of Smithville High School and the Wayne County Schools Career Center.
On December 28, 1985, she married James H. Mullet.  He died October 21, 2002.
Bobbie Jo loved to sew, giving massages to people and doing craft.  She had worked for Farmer’s National Bank, Lehman’s and Flex.
She is survived by her mother of Wooster; her father and step-mother, Julie of Big Praire; children, James Holden Mullet of Colorado, Hanna (Whit) Hartman of Massillon, Justin (Kari) Mullet of Killbuck, Nicholas Mullet of Mount Eaton and Ian Cohen of the home; grandchildren, Connor and Kimber Hartman and Karson, Ida and Emma Mullet; sisters, Barbara (David) Smith and Brenda (Mike) Morris of Wooster; her former husband and Ian’s father, Nicolaus Cohen; and several aunts, uncles, nieces, nephews, cousins and many close friends.
The family would like to thank the staff of Wooster Community Hospital, the A.L.S. Group of Canton and LifeCare Hospice for all of their care and support.
Memorial services will be held on Saturday at 1:00 PM at the Mount Eaton Community Church with Pastor Norman Shetler officiating.  Spidell Funeral Home in Mount Eaton is handling the arrangements.
Spidell – Mount Eaton