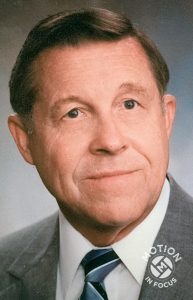 He was born and raised in Toledo, OH, the son of Clifford and Melania Jaeck (McNerney), both of whom died young (46 and 33, respectively). He was raised by his aunt and uncle, John and Mary Connors (McNerney), from age 11 to 17 when he dropped out of DeVilbiss High School (Toledo) and joined the Marine Corps in January of 1947. From 1948 until 1951 he served on the Silent Drill Team at the Marine Barracks in Washington, DC. He completed high school through correspondence courses offered by the Marine Corps Institute and received a diploma from DeVilbiss in 1950. Later, he obtained a BS degree from the U of MD and a law degree from Washington College of Law of American University in Washington, DC (both colleges at night). He thereafter passed bar exams in DC and Ohio. He was commissioned a 2nd Lt in 1951, after which he served in Korea as an infantry and tank platoon commander. He retired from the Marine Corps in 1969 at the age of 39 with the rank of Lt.Col., having served as a Judge Advocate his last 7 years.
Following his retirement from the Marine Corps he returned to Ohio and served as an Assistant Prosecuting Attorney of Stark County OH, rising to be Chief of the Criminal Division. Later he practiced law in Navarre, OH for 18 years before retiring in 1992 and moving to Venice in 1995.
He was preceded in death by his wife, Nancy (Utsler-Waggoner), who was fatally injured in their Piper Comanche aircraft in May of 1991 while receiving instruction through a women’s flying program to land the plane in the event Bill became ill.
Bill loved flying, accrued 2500 hours of flight time, and held a commercial license with single and multi-engine, flight instructor and instrument instructor ratings. He had flown 40 round trips in his two Comanches between Ohio and Florida before selling his second Comanche in 1998.
While practicing law in Navarre, he also served as president and chairman of the board of directors of The Navarre Deposit Bank. Co. In retirement in Venice, he served as president of the Jacaranda West Country Club, the Jacaranda West Homeowners Association and the Cove Pointe Homeowners Association.
He was a member of Our Lady of Lourdes Catholic Church, the Veterans of Foreign Wars, American Legion, Military Officers Association of America, Aircraft Owners and Pilots Association and the National Association of Flight Instructors.
He is survived by his loving wife, Diane (Wegman-Connors), formerly of Toledo, children, William of San Francisco, Shawna Hunt (Warren) of Loudon, TN, Kathleen of Gulfport FL; step-son, Randal Waggoner (Renea) of Waynesburg, OH; grandchildren, Erika Hasford (Jeremy) of Spring Hill, TN, Jason Hunt (Sara) of Middletown, OH; step-grandchildren, Nathan Waggoner (Kristin) of Canton, OH, Jenna Wagner (Landon) and Miranda Waggoner of Waynesburg, and six great-grandchildren.
In lieu of flowers, deductible contributions may be made to the Marine Corps Heritage Foundation, 3800 Fettler Dr., Ste. 104, Dumfries, VA 22025. This foundation is the founder of the Marine Corps Museum in Quantico, VA.
Funeral services will be held on Saturday at 11:00 am at the Spidell Funeral Home, 209 Chestnut Street, NW, Brewster, OH 44613, with Father Edward Beneleit officiating.  Burial with military honors will follow in the Union Lawn Cemetery in Navarre.  Friends may call on Saturday from 9-11:00 am prior to services.
Spidell – Brewster