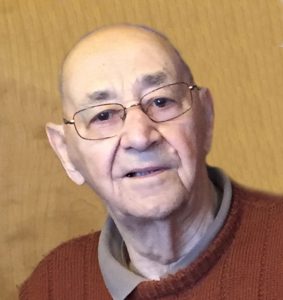 Heinz was born on June 15, 1925, in Durnten, Zurich, Switzerland, to the late Jean and Marta (Raschka) Peter and graduated from Swiss Dairy College.  He married Rosa Tanner on October 12, 1953, in Switzerland. Rosa survives.

He was a Master Cheese Maker for many years and then worked for Schantz Pipe Organ Company in Orrville for 33 years, retiring in 1991.

Heinz was a member of Christian and Missionary Alliance Church, a former President of the Canton Swiss Society, and former Vice President of the North American Swiss Alliance. He enjoyed woodworking, model railroading, and as a Master Cheese Maker, he was a connoisseur of fine cheese.

He was preceded in death by brother, Jean Peter; and sister, Dorli Lamprecht.

Memorial services will follow at 1:00 pm on Saturday, at the CMA Church, with Pastor Ray L. Pfahler officiating.