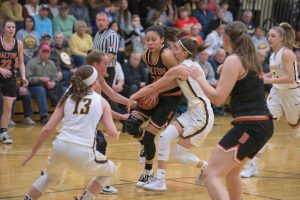 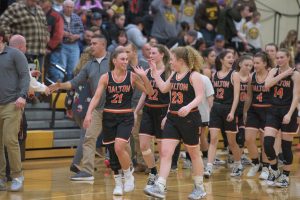 There is always a buzz of excitement anytime Dalton High School’s girls varsity basketball team has a matchup with Waynedale, but the game between the Lady Dawgs and the Golden Bears on Feb. 6 had more than usual at stake.

With a 39-37 win, Dalton secured the first WCAL championship in school history for the girls team. They also pushed their win streak to 19 games. Dalton’s overall record is 19-1 and their WCAL record is 13-0.

“Our girls have accomplished something that I do not think they will truly realize how difficult and unbelievable it is until later on in life,” she said. “There has never been a Dalton girls basketball team to ever say, ‘We were WCAL champs.’ Our coaching staff gives a standing O to all of our kids, JV and varsity, that have competed all season, in both practices and games. It took a team effort. Their commitment, determination, dedication and desire to become the best basketball team allowed them to accomplish their goal. Now, we will get prepared for Rittman and work to finish what our girls started.”

It was a low-scoring game that was big on defense. Waynedale scored the first five points of the game, but they never led again. The score at the end of the first quarter had Dalton leading 7-5. All seven of those points came from senior Makenna Geiser, who finished the night with 14 points, seven rebounds and four assists.

Geiser knew the test her team was facing.

“We knew it was going to be a dog fight, so we didn’t want to get too frustrated during the lows and too excited on the highs because basketball is a game of runs,” she said.

The Lady Dawgs built up a 16-10 lead at halftime. They led 26-12 with less than three minutes to go in the third quarter.

The Bears attempted to close the gap in the fourth quarter. They cut Dalton’s lead to 35-29 with under three minutes left in the game. Camille Beatty was fouled with the score 35-31. She made both shots of the one-and-one to boost the Lady Dawgs to 37-31. Waynedale’s Brooklyn Yoder nailed a triple to put pressure on Dalton. After a timeout, Geiser was fouled with less than seven seconds to go. She swished in both shots to give her team some insurance. When she stepped to the foul line, Geiser prayed for a favorable outcome.

“I prayed a little bit, to be honest,” she said. “I knew that God was with me, so I shot the ball with confidence. I’m just happy I was able to help the team get the win.”

That insurance policy was needed when Waynedale hit a three-pointer at the buzzer, but the win was already secured for the Lady Dawgs.

Dalton was strong on defense. They collected 30 rebounds as a team and 10 of those boards were courtesy of Tess Denning. Other notable players were Mia Weaver with 10 points, six rebounds and two assists and Kelsey Shoup with four points, two rebounds and two assists. Shoup was elated to win the title during her final season with the Lady Dawgs, but she is not ready for her season to end anytime soon.
“I’m so proud of everyone on our team and so, so excited that we were the ones able to do this for Dalton,” she said. “This season has meant so much to me. There is no other way that I would have wanted my senior season to go than being awarded the WCAL title. We are so proud and we feel accomplished, but we aren’t satisfied. We are ready for tournaments and excited to reach our goals.”

Beatty was thrilled to be a part of the first girls WCAL title in school history and winning it against the Bears made it even better for her.
“To win the school’s first WCAL is incredible and to earn it against a quality opponent like Waynedale makes it even more special,” said the senior who totaled seven points and two rebounds in the game. “I have a lot of respect for their team. This has been an incredible run with some of the best people. I just don’t want it to end. It’s an honor to be a part of the first girls team and it’s even better that I got to do that with my best friends.”

Lady Dawgs knocked out of tourney by Redbirds in OT