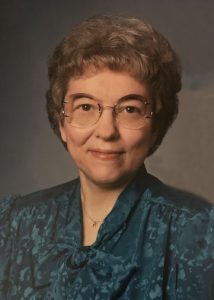 WOOSTER – Esther Yutzy Miller passed away February 9, 2020 after a period of declining health at the age of 91.  Esther was born January 23, 1929 near Berlin, Ohio to Ervin and Emma (Troyer) Hershberger and married Wayne J Yutzy April 6, 1947.  He died March 23, 1996.  They were members of the Wooster Mennonite Church and youth sponsors for a number of years. In later years, Esther married Dave A. Miller of Apple Creek, Ohio and he died July 4, 2017.

Preceding her in death were her parents and a brother, Raymond Hershberger.

The family wishes to thank all who cared for Esther, especially David and Clara Miller, Phil and Effie Troyer and the Hospice Staff.

In lieu of flowers, memorial contributions may be made to Life Care Hospice, 1900 Akron Road, Wooster, Ohio 44691.

Auble Funeral Home in Orrville is assisting the family with arrangements.  Online registry and expressions of condolence may be made at the funeral home’s website at www.aublefuneralhome.com.