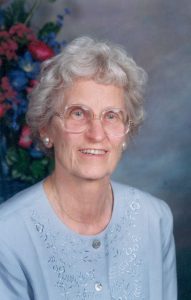 Margaret was born on October 18, 1919, in Canton, Ohio, to the late Frederick and Fern (Tressler) Leist and graduated from Canton McKinley High School with the class of 1937. She then obtained her Bachelor’s degree from Kent State University in 1941, and her Master’s in Nursing from Frances Payne Bolton School of Nursing at Case Western Reserve, in Cleveland.  She married John Paul Miller on June 11, 1944, in Canton, Ohio, and they were happily married for 40 years until his death on October 18, 1984. They raised a family of 4 daughters.

Peg was a member of the Trinity United Methodist Church, a former Girl Scouts leader, a member of the Mother Study Club, the Nomad Club, Tri-Arts, AAUW, Sew Journ, United Methodist Women, Priscilla Circle, and various other church committees. She enjoyed time with her family, travel with her husband, and summers at Lakeside. A special interest of hers was volunteering at the Orrville Historical Society.

In addition to her husband and parents, she was preceded in death by her brothers, Robert and Lowell Leist, and her sister, Catherine Leist Arva.

Private services for the family will be held at a later date. Burial will take place at the Crown Hill Cemetery in Orrville.