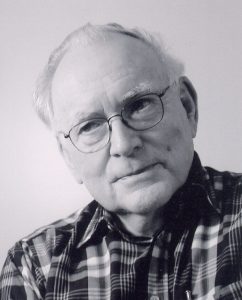 Harry J. Fry, Age 92
April 8, 2020
Every morning Harry would open the newspaper to the obituaries and after reading them, he would look up, smile, and say “It’s a good day, my name’s not in there” – But today it is.
Harry was born on November 27, 1927, on the family farm near Carlisle, Iowa, to William and Flossie Fry.  He graduated from Carlisle High School in 1945. He then attended Iowa State University for one year before entering the Army.  He served in the Army for two years, part of the time as a radio operator in Italy as a member of the Army of Occupation following WWII. Upon discharge, he returned to Iowa State and in 1951 graduated with a degree in Forestry. He was immediately called back into the Army during the Korean War as an artillery officer.  Harry survived a year of combat in Korea as a forward observer and later as headquarters battery commander.
Harry worked for Koppers Company in the wood preserving division for 40 years, working in plants in Florence and Charleston, SC, Horseheads, NY, and Kansas City, MO before joining the Product Development Laboratory in Orrville.  The last ten years he spent in the Technical Services Department. He holds a U.S. patent for a plywood treating process he developed.
He was a loving husband and father.  Family was always very important to him, and he will be deeply missed.  Harry was an active member of Trinity United Methodist Church. He enjoyed singing in the choir for 36 years and teaching Adult Sunday School classes.  He also served on several committees and participated in most of the “work days” around the church. He was an active member of the Orrville Exchange Club for 27 years.
Harry also enjoyed traveling to all 50 states plus visiting many countries on six of the seven continents around the world.   Reading, playing Bridge with friends, and working in his yard and vegetable garden were things he enjoyed doing around his home.  He especially enjoyed tent camping with the family in Colorado, New England, and Virginia, even when he woke up to frost on the ground.
Harry enjoyed his life right up to its sudden end due to a heart attack.
Surviving are his wife, Phyllis; three daughters, Peggy (Bill Kelsey) of Austin, Texas, Kathy (Ray Green,) of Springfield, VA, and Karen (David Neily) of Reedville, Virginia; seven grandchildren; plus 10 great-grandchildren.
He was preceded in death by his parents; his brothers, Perry Wes, William Frederick (Jack), and John Fry; as well as his sister, Audra Mott; and an infant son, Kenneth Alan.
A Celebration of Life Service will be held once the COVID-19 threat is over. Burial will take place at Ohio Western Reserve National Cemetery.
Memorial contributions may be made to Trinity United Methodist Church, 1556 Rex Drive, Orrville, OH 44667 or to Ohio’s Hospice Lifecare, 1900 Akron Road, Wooster OH 44691.
Posted in Obituaries