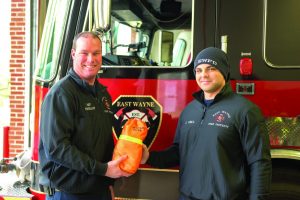 From left, East Wayne Fire District Chief Kyle Nussbaum and firefighter/paramedic Isaac Hull show one of the rescue throw ropes that the fire district plans to install at properties with ponds within the coverage area. Firefighter/EMT Ryan Sprunger had the idea to to make throw ropes available. (PHOTO BY DREW HUGLAND | DGKN)

DALTON East Wayne Fire District is continuing a campaign initiative with the goal of having rescue throw ropes available at all properties with ponds throughout its coverage area.

Thanks to donations from the community, EWFD Chief Kyle Nussbaum said he hopes to begin installing the ropes and tube holders next to ponds in a few weeks.

The idea for Jenson Ropes came out of a tragic incident a few days before Christmas. Brothers Jenson, 4, and Landon Hodge, 6, were playing outside on a sunny wintry day at their family’s farm in Sugar Creek Township when they became trapped in an icy pond.

Nussbaum and EWFD firefighter/EMT Ryan Sprunger were among responders with mutual aid from Kidron and Mt. Eaton fire departments.

The boys’ grandfather was able to grab the older brother but he fell through the ice himself, according to a Wayne County Sheriff’s Office report. Emergency rescue crews pulled the two to safety. Jenson was submerged in the water and Sprunger pulled him out. CPR was performed to revive him and he was transported. Sadly, he died two days later at Akron Children’s Hospital.

To prevent an event like this from happening again, Sprunger had the idea of making rescue throw ropes available. EWFD began the campaign, and the throw bags are labeled in honor of Jenson Hodge’s memory.  Each rescue throw rope costs about $40. East Wayne welcomes any donation amount toward purchasing the ropes and the holders. East Wayne’s goal is for every pond in the area and surrounding areas to have a rescue throw rope nearby to be used by a bystander in the case of someone being trapped in the water. The ropes will be in a bright orange bag and placed in a tube holder so they can be accessed quickly and easily by anyone.

The novel coronavirus (COVID-19) outbreak has slowed things down, but Nussbaum said he would like to get out soon to begin installing the ropes. Donations have been coming in and a local boy scout group has expressed interest in installing the ropes and holders at ponds, he said. Nussbaum said he intends to install the first rope at the pond where the accident happened.