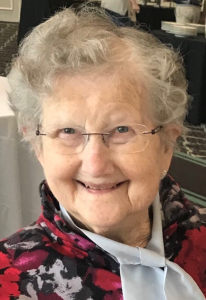 Smithville  —  Margaret A. Hubacher, 91, of Smithville, died Monday, April 13, 2020, at Wooster Community Hospital.
The family will have a private burial service at Smithville Cemetery with Rev. Tom Ledford officiating.  A memorial celebration of Margaret’s life will be announced and held at a later date.
The family suggests that friends may make a donation in her name to CAMO (Central American Medical Outreach), 322 Westwood Avenue, Orrville, OH 44667.
Auble Funeral Home in Orrville is handling arrangements. Online expressions and guest book registry are available at www.aublefuneralhome.com
Margaret was born Nov. 11, 1928, on a dairy farm north of Wooster, the daughter of Chester and Fern (Lehr) Burkey. She was active in 4- H and rural youth where she met and fell in love with her future spouse.  She married Paul Hubacher on Sept. 28. 1947.  He passed away in 2008.  They lived in Albuquerque, New Mexico for 3 years, then moved to Smithville.  Together they ran Hubacher Builders for over 45 years while raising 5 children.  Margaret was an active member of the Orrville Christian Church, a cub scout den mother, a devoted school booster, and a member of the original Smithville Homemakers Club.  She loved nature, flowers, and birds.  Most important to Margaret was her family, that included the nurturing of her 5 children, 13  grandchildren, and 18 great grandchildren, and that is what she would want people to remember about her.
Surviving Margaret are sons;  Don Hubacher of Jeromesville, Jon (Sara) Hubacher of Smithville, Paul Jr. (Darla) Hubacher of  North Carolina, and Fritz (Susie) Hubacher of Columbus; a daughter Carol (Roger) Bowers of Orrville; grandchildren, Sadie Smith, Jessie Vesper, Josh Hubacher, Corrie Graham, Jonathan Hubacher, Andrew Hubacher, Mara Stamp, Nicole Secrist, Kimberly Shifley, Brian Hubacher, and Emma, Abby and Lydia Hubacher; great grandchildren, Owen, Wyatt, Mason and Chloe Smith,  Maggie and Max Vesper, Liam, Ava, and Lucas Hubacher, Louisa, Clara, and Annalise Graham, Kaylee and Cole Hubacher, Garrett and Meredith Stamp, and Lawson and Graham Shifley; and brothers, Dan and Jim Burkey.
In addition to her husband, Paul, she was preceded in death by a daughter-in-law, Sue Hubacher; her parents; and a brother, Dwight Burkey.
Posted in Obituaries