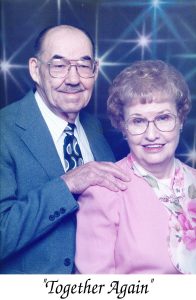 Irene E. Prater, age 97, of Orrville, died Thursday, April 23, 2020, at Shady Lawn Health Care Community in Dalton, following a period of declining health.
Irene was born on April 18, 1923, in Hico, West Virginia, to the late Ernest and Hester (Gill) Holliday and graduated from Nuttal High School in Lookout, WV, and she was the last living member of the class of 1941.  She married Maitland T. Prater on August 3, 1946, in Fayetteville, WV. Maitland died on May 21, 2013.
She worked as a bookkeeper for the New River Coal Company in Winonna, WV for 4 years, before she became a homemaker for her family.
Irene was a member of Easton United Methodist Church and a lifetime member of the Orrville VFW Ladies Auxiliary.  She enjoyed spending time with her family, especially her grandchildren and great grandchildren.  She will be remembered as a person friends could lean on and would help anyone in need.
Surviving are her son, Michael (Betty) Prater of Orrville; daughter, Rhonda E. Wilson of Orrville; five grandchildren, Matthew Prater of Cleveland, Kyle (Kris) Prater of Lakeland, FL, Barry Wilson of Orrville, Bryan Wilson of Orrville, and Danielle (Jason) Brynes of Orrville, 9 great grandchildren; two brothers, Dale (Fornie) Holliday of Wooster and John (Sherry) Holliday of Orrville; sister, Carol Campbell of Hico, WV; and numerous nieces and nephews.
In addition to her husband, she was preceded in death by a brother, Ernest Holliday, Jr.; and sisters, Ernestine Strunk, Charlotte Holliday, and Nelda Louise Holliday.
A memorial service will be held at a later date.  Burial will take place at the Ohio Western Reserve National Cemetery in Rittman.
Auble Funeral Home in Orrville is assisting the family with arrangements. Online registry and expressions of condolence may be made at the funeral home’s web site at www.aublefuneralhome.com.
Posted in Obituaries