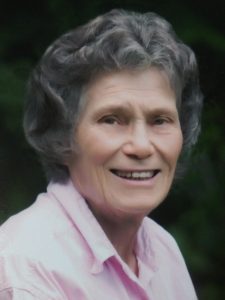 Columbus — Ruth B. Vandersall, age 83, of Columbus, formerly of Orrville, died Sunday, April 26, 2020, at her home in Columbus.
Ruth was born in 1936 to Raymond and Stella (Gotter) Blumberg on the family farm near Collinsville, IL, and attended Southern Illinois University.  After several years as a schoolteacher, she earned a master’s in library science from Vanderbilt/ Peabody College and took a library position in Fairbanks, AK.  In 1966 she married Lloyd K. Vandersall and settled in Bowie, MD until moving to OH in 1986.
Ruth was preceded in death by her husband Lloyd, her brother Raymond Jr., and her daughter Barbara, whom Ruth had cared for at home until Barbara’s death in 2018.  She is survived by her son Raymond Vandersall of Albuquerque, NM, and her sister-in-law Alice Blumberg of IL.
Ruth enjoyed meeting people and was devoted to her friends. Ruth was an active supporter of sustainable energy, as well as many land and wildlife conservation organizations. She loved being outdoors, a natural and unruly yard, gardening, and most of all, planting trees.
Ruth will be buried in a private service at Martins Mennonite Church Cemetery in Orrville.
Online registry and expressions of condolence may be made at www.aublefuneralhome.com.
Posted in Obituaries