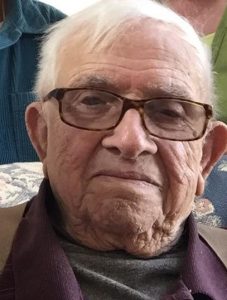 Paul Jay Miller died suddenly at his home on May 10, 2020.  He was the last survivor of a large blended family.  He was known to all by Jay, his middle name.

Jay was born on April 19, 1921 to William L. and Jemima (Troyer) Miller at their home near Millersburg, Ohio.  His mother died 10 days after his birth.  For the first year of his life, Jay was raised by his uncle Fred and aunt Malinda Miller, until his father married Barbara (Kandel) Weaver.

Jay attended Buena Vista school and had a life-long enjoyment of books and learning.  He was a regular patron of the library, especially in his retirement.  Jay enjoyed books about animals and birds, and was so happy to see eagles numerous times from his window this spring.

Jay served in Civilian Public Service in New Jersey and Virginia during WW II and married Velma Kandel on October 26, 1943.  He thereafter enlisted in the US Army in the summer of 1944.  While serving his active duty, Jay spent time abroad as a surgical technician in Tarawa in the central Pacific Ocean.   During his service, his first child Marlene was born.  He didn’t see her until she was 8 months old.

Jay was always a hard worker in every endeavor.  His work ranged from cheese making at Sharp Run Dairy, to farming at Conneaut Lake, Pennsylvania, factory work, and building “little red barns” which can still be seen in the area.  Jay also was a driver for the Amish for many years, traveling to almost every US state.  Many treasured friends of his remain today in the Amish community.  He was a member of Smithville Mennonite Church.  Jay was skilled at growing plants and flowers, and will be remembered for the beautiful flower garden at his Orrville home. He lived a rich, active life with robust health, and was still driving up until the day he died.

Surviving him are his children, Marlene (Robert) Campbell of Powder Springs, Georgia; Gary of Brownsburg, Indiana; Anita (George) Bixler of Medina; Fred (Lynette) of Smithville; James (Diana) of Brewster; and Eric (Sherry) of West Salem.  A son, Dallas, died in 2016.   Jay also is survived by his much loved 15 grandchildren and 28 great-grandchildren, and by many nieces and nephews, who were important to him.  He is also survived by Herma’s children Lyle (Pam) Blosser, Myrna Blosser, and Nyla (Patrick) Barrett.

A virtual service will be live streamed on the Auble Funeral Home Facebook Page at 2:30 PM on Monday, May 18, 2020.  Burial will take place at Smithville Mennonite Cemetery.

Memorials may be made to the Smithville Mennonite Church 6097 Akron Road, Smithville, OH, 44677, www.smc585.org