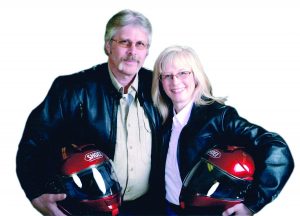 The first Sunday in May was one of the first truly pleasant days of spring. The warm bright day beckoned people out of their homes. The absence of the familiar chilly air gave a comforting hint that warmer and sunnier days were ahead.

Avid motorcyclists Ray and Cindy Davies heard the inviting call of the outdoors May 3. They donned their red motorcycle helmets, hopped on the Yamaha touring bike they had purchased the year before, and responded.

While riding in Wooster and making a turn on green, the Davies’ suddenly felt the front bumper of a pick-up truck connecting with each of their left legs. While the truck driver made contact with the motorcycle before stopping, the driver thankfully realized his mistake in time and backed up instead of driving forward.

The couple was overcome by pain and surprise. But they also were taken aback by instantly finding themselves surrounded by a protective gathering of fellow motorcyclists.

Ray Davies found himself on the receiving end of care he has been used to giving for the past 25 years as a Kidron Volunteer firefighter. Davies happened to know members of the Wooster emergency crew who responded.

He and his wife were both taken to the hospital and underwent surgery. By mid-week they both were back home and awaiting a visit from a therapist.

Still in some pain but counting their blessings, the couple sounded optimistic about their recovery with steel rods in each of their left legs.

“We’re sharing everything together,” Davies said.

They said they appreciated help they have received from Orrville Christian Church, as well as the many phone calls and well wishes from people.

“I just want to repeat and emphasize the blessings upon us from family, neighbors, Orrville Christian church family, Kidron Volunteer Fire family and friends,” Cindy Davies wrote in an email. “This response is really amazing! Thank you to all!

“We should also send a big thank you to the “strangers” who stopped at the scene, and all the EMS, hospital workers at both Wooster and Canton. Everyone was so very kind and gentle. When you are in pain, you notice!”