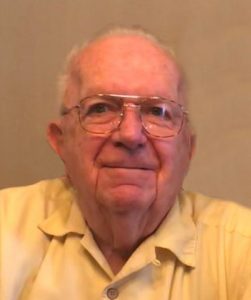 Please use this version.
ORRVILLE — Donald E. Fiscus Sr., age 89, of Orrville, died Thursday, May 14, 2020, at Shady Lawn Health Care Community in Dalton, following a period of declining health.
Don was born on June 25, 1930, in Wooster, Ohio, to the late Fred and Ruth  (Matter) Fiscus and married Cledia “Coletta” Grisetti. Coletta died in 1988.
He graduated from Orrville High School and the Ohio State Fire School.  He was the previous owner of D & L Pizza Shop and several other ventures in Orrville, last working as a salesman and District Manager for Sysco for 12 years, retiring in 1992.
Don was a member of St. Mary’s Catholic Church, the Knights of Columbus, and the President’s Club for Sysco.   He enjoyed  fishing, traveling the globe, and high school baseball and softball.  He was an avid collector of guns, coins and many other items.
Surviving are two sons, Donald E. (Chris ) Fiscus Jr. of Henderson, NV and Joseph E. (Linda) Fiscus of West Salem; daughter, Diana Stanton of Orrville; three grandsons, Joshua Fiscus of Cleveland, Joseph Fiscus, Jr. of Avon Lake, and Chad (Jamie) Stanton of Orrville; three great grandchildren, Alex Fiscus, Colby Stanton, and Chase Stanton; brother, Larry (Judy) Fiscus of Orrville; and many other friends and family including special friend, Rodney Sturgis of Wooster and a niece, Marianne Rousseau of Wooster.
In addition to his wife, Coletta, he was preceded in death by a granddaughter, Kelly Fiscus; and brother, Richard Fiscus.
Graveside services will be held at 1:00 PM on Saturday, May 16, 2020, at Crown Hill Cemetery in Orrville, with Father Ronald J. Turek officiating.
Memorials may be made to Knights of Columbus, 1 Columbus Plaza, New Haven, CT 06510, www.kofc.org.
Posted in Obituaries