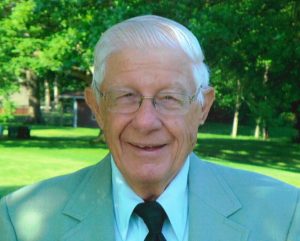 Wally was preceded in death by his wife of 66 years, Josephine, and was the last of 12 children, born to Newton and Ada Davis. Wally enjoyed a long and happy life dedicated to service–to his family, to his country and to his community. Wally married childhood sweetheart Josie in 1941 and together they raised four daughters. He was a remarkable father to Janice (Denny) Brahler, Walle Anne (Tom) Gerbeck, LaVonne (Ray) Heitger, and Mary (Norm) Guimond who cherish his memory along with their children, grand children, great grand children, and his many nieces and nephews. He was a trusted father figure to so many.
Wally saw heavy action during his four years in the Navy in World War II, made tolerable by playing guitar in a band alongside two of his brothers aboard the same ship. Wally loved music and continued to play guitar throughout his life. After the war, Wally followed in his father’s footsteps and hired onto the railroad to which he devoted the next 40 years. Upon retirement, he continued his connection to the railroad by joining NARVRE as a member for 30 years and president of the local chapter for a decade. Wally served as Councilman for the Town of Brewster as well as Director of Disaster Services. He was an original volunteer of the Fairless Food Cupboard in the early 1980’s and continued working there until he was 90. He was Commander of the Brewster American Legion and served as Vice President of the Brewster-Sugarcreek Historical Society. Wally was a talented carver and a member of the Carvers’ Club of the Wilmot Wilderness Center. His carvings were exhibited throughout Ohio and he generously gifted his artwork to family and friends. Wally was a man of good cheer, great kindness and sage wisdom. He was an entertaining raconteur, recounting hilarious adventures from his childhood, aboard ship in the Navy, and on the railroad. He was quick to laugh, sing and dance, and encouraged everyone to join him. He will be greatly missed.
The family sincerely thanks CrossRoads Hospice and the wonderful staff at the Henry Inn at Brewster Parke, especially Gay, for their love, support and care of our father. In light of our father’s charitable spirit and in lieu of flowers, please consider a donation in his honor to the Brewster-Sugarcreek Historical Society, 45 Wabash Avenue South, Brewster OH 44613. Interment will be private.  Spidell Funeral Home in Brewster is handling the arrangements.
Spidell – Brewster
330-767-3737
www.spidellfuneral.com
Posted in Obituaries