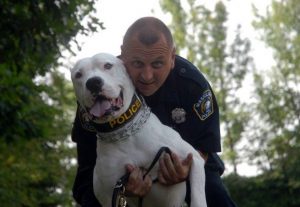 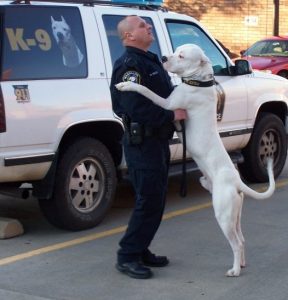 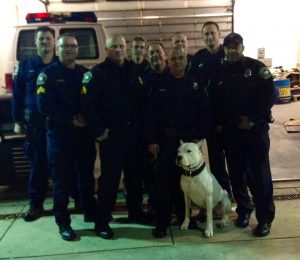 To honor the memory of a Massillon police dog who became known worldwide, a procession with police escort is expected Wednesday morning along U.S. 30 from Country Corner Animal Clinic on Kidron Road back to the city the K-9 served for more than 10 years.

Dr. Ted Gerber, who was Inca’s veterinarian for years, said the Dogo Argentino may have been one of the more famous animals he treated at Country Corner Animal Clinic. Gerber said he puts special care in all of the animals he treats but he feels extra responsibility when he is able to treat working dogs like Inca, as well as therapy and service dogs.

The nearly 12-year-old muscular, white dog that weighed more than 100 pounds looked tough when he needed to but he was a “sweetheart” around his handler Officer Miguel Riccio, Gerber said.

“Inca was a presence,” Gerber said.

Inca succumbed to kidney failure May 26, according to a Facebook post written by retired MPD Sgt. Brian Muntean. He never missed a shift and he worked up until his last day, Muntean wrote.

Gerber said the dog’s ashes will be escorted mid-morning from the vet clinic to Massillon. Dalton Police Chief Ryan Pearson said village police will assist and participate in the procession.

Local police not only are familiar with Inca and Riccio but some area K-9 units train together. Dalton Capt. Chris Hummel used to be a K-9 handler with the Navarre Police Department. Apple Creek Police Chief Jason Woodruff and Officer Gene Martin also were expected to be in attendance Wednesday. Woodruff is a handler for K-9 Axel and Martin is a handler for K-9 Jager.

Police dogs often are breeds such as German Shepherd or Belgian Malinois. The purebred Dogo Argentino, or Argentinean Mastiff, was unique among his fellow K-9 units. Like some of the human officers on the police force, Inca had his own collectible card. According to the card, Inca was born in September 2008 and began serving in 2009. He was the first of his breed to be state-certified as a dual-purpose K-9 unit in the United States.

“As long as Miguel was with him, he was a sweetheart,” Gerber said. “The day he came in here and was sick … he was kissing my face. It broke my heart.”

According to information on the Massillon Police Department’s Facebook page in 2017, Inca is credited with making more than 1,000 drug arrests, locating missing persons, apprehension of wanted fleeing criminal suspects, recovery of articles used by during a crime, and the seizure of vehicles and large amounts of money.

Riccio noted in the 2017 post that thanks to the MPD’s Facebook page, Inca became known worldwide for his work and unique look.

“He protected his brothers and sisters, and loved being around them, especially on his birthday when we made him a steak,” Muntean wrote in his post May 26. “He was well known on the streets of Massillon, Ohio and Stark County. He was respected by all.”