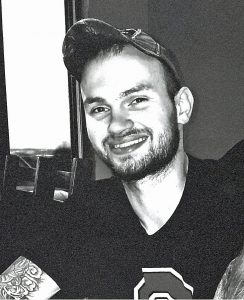 He was born in Wooster on February 15, 1995 to Robert L. and Lisa (Strong) Milner.
Our family’s hearts are broken at the loss of such a beautiful young man whose life was cut short entirely too soon. Dallas and his dog Razzie never awoke due to accidental carbon monoxide poisoning. Dallas was the kind of person that made you smile when he walked into a room. Having such a big heart and always joking around, he impacted so many lives throughout the short 25 years he was with us. Words cannot express and tears will never wash away the pain we feel here on Earth, but one thing we can be sure of is that he is smiling ear to ear, reunited with his dad. Dallas, you will be greatly missed. We love you so much and will see you again. Psalm 116.
Dallas is survived by his mother and step-father Lisa and Jake Hershberger; brother, Brandon Milner, half-sister, Lauren (Milner) Shampine; half-brother, Shea Milner; grandparents, Jim and Marla Strong and  Bob and Sue Milner
He was preceded in death by his father, Rob Milner.
Memorial services will be announced at a later date. Spidell Funeral Home in Mount Eaton is handling the arrangements.

Condolences may be left through the funeral home website at www.spidellfuneral.com.