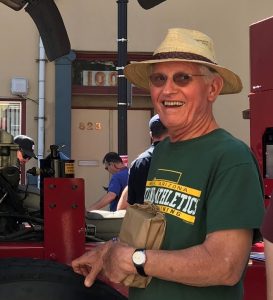 Glenn D. Meier
September 29, 1939 – June 14, 2020
Resident of Mountain View
Mountain View, California – Glenn D. Meier, age 80, of Mountain View passed away Sunday, June 14, 2020, after battling prostate cancer.
Glenn was born on September 29, 1939, in Wayne County, Ohio, and was the son of Glenn E. and Edith (Schnell) Meier. He is survived by daughters Denise (Collin) Klepfer of Berthoud, Colorado and Janine (Michael) McCurdy of San Jose, California and son Aaron (Beth) Meier of San Jose, California. He had five grandchildren Amanda, Alicia, Jennifer, Alec and Ben and two great-grandchildren Wesley and Lucas. A brother Charles Meier of Arizona and sisters Virginia John of Federated States of Micronesia, Rosemary Franceschini of Oregon and Kathy Miller of Ohio.
He was preceded in death by his wife, Gwen and daughter Rachel, a sister, Jane Elizabeth and a brother, James Lee.
Glenn was a 1957 graduate of Dalton (Ohio) High School, where he was enrolled in the Vo-Ag program and was a member of the Future Farmers of America.
Glenn and Gwen relocated to California in the 1960’s with their two young daughters. A daughter and son were added to the family in California. He worked for 40 years as a computer programmer in multiple industries such as the City of Mountain View, Glorietta Foods, and Hewlett Packard to name a few. He was a dedicated donor of whole blood over his lifetime. Baseball was one of the things Glenn loved, particularly his Oakland A’s.
Glenn was a person who touched everyone he met. He was known for his kindness, generosity, honesty and work ethic. He will be greatly missed by many people.
Contributions can be made in Glenn’s honor to the American Cancer Society.