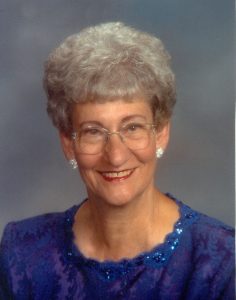 Orrville — Jacqueline D. Weeman entered into eternal rest on Wednesday, June 24, 2020, at the age of 83.  She was born on January 2, 1937, in Canton, OH. She was the daughter of the late Harold and Irene (Brankel) Kelly of Canton and was united in marriage to Roy D. Weeman on September 16, 1955 in Las Cruces, NM, where Roy was stationed in the Army.
Jackie was a graduate of Canton Timken High School and majored in accounting.  She worked as a bank teller until her marriage to Roy.  She then worked as a secretary on data reduction at the missile base at White Sands Proving Grounds, NM. She worked there until their first child was born at El Paso, TX.
On returning to Ohio, Jackie and Roy resumed dairy farming at the home farm in Orrville.  Roy semi-retired in 1988.  All six of their children were raised there and learned the value and joy of hard work.
Jackie first and foremost was a homemaker. She thoroughly enjoyed raising their growing family.  Her relationship with Christ was always utmost in her mind and her home church in Ohio was Orrville Christian Church.  She enjoyed attending family and sporting events, band shows, plays, etc.  She loved to dance, play cards, and golf.  Her family will enjoy her oil paintings for many years. Jackie and Roy traveled extensively after semi-retiring. They visited all 50 states and at least a dozen other countries in their travels. Winters were spent in their home in Bonita Springs, FL, the past 30 years, where they attended Anchor Christian Church, and was a popular destination for their family and friends.
Surviving Jackie are her husband Roy; six children, John (Jeanne) Weeman of Wooster, Daniel (Tiffany) Weeman of Orrville, Ann (Jeff) Yoder of Massillon, Elaine (Gary) Troyer of Shreve, Steven (Barb) Weeman of Orrville, and Ben (Kisa) Weeman of Wooster; sixteen grandchildren, Jack, Elizabeth, Aly, Derek, Brent, Sean, Bailey, Jacob, Ryan, Tim, Brittani, Mark, Seth, Neal, Cally, Glenn, Mitch, Brandon, Joel, and David; two great-grandchildren, Brock Weeman and Lyle Yoder; sibling, Richard Kelly of Canton; and her best friend, Leeta Wolfe.
She was preceded in death by her first grandchild, Jonathan Carl Troyer, stillborn on May 16, 1985; and siblings, Shirley Lenhart, Carolyn  Funk, Nancy Wall, Brenda Yerian, Harold Stanley Kelly, and Robert Kelly.
The family would like to thank all those who took such good care of her during her recent illness.
Services will be held at 11:00 am on Thursday July 2nd, at Orrville Christian Church, 925 N. Elm Street, Orrville, with Pastor Tom Ledford officiating. Burial will take place at the Crown Hill Cemetery in Orrville.
A viewing will be held from 10:00 am to 11:00 am prior to the service at the church on Thursday, during which the family will not be greeting.  Although the public viewing and service is exempt from the current gathering limitations, the risk of virus transmission from one person to another still exists.  Visitors are asked to wear masks if possible, practice social distancing, and adhere to the posted signs and spacing limitations.  Seating may be limited at the funeral service.
Donations in lieu of flowers can be made to St. Jude Children’s Research Hospital P.O. Box 50 Memphis, TN, 38101-9929.
Online registry and expressions of condolence may be made at the funeral home’s web site at www.aublefuneralhome.com.
Posted in Obituaries