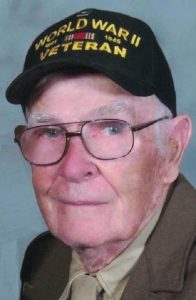 ORRVILLE — Donald H. Caskey, age 96, of Orrville, died on Thursday, June 25, 2020 at his residence, following a period of declining health.
Don was born on June 26, 1924, in Orrville, to the late David and Mary (Mattie) Caskey. He attended Orrville City Schools and served as a PFC in the United States Army (Air Corps) during WWII.  He married Beulah I. Knisley in August of 1951, at the Orrville C&MA Church.
He worked as a Group Leader for the Koppers Company in Orrville for 45 years, retiring in 1986. While working there, he also milked cows and farmed 60 acres. After a barn fire, a pond was put in and his co-workers encouraged him to add fish so that they could come fish. Later, a picnic shelter was added. One day, a neighbor asked if he could park his camper there for a week. This eventually grew to become an 88 site campground with multiple pavilions and a swimming lake. Caskeys Campground is still enjoyed today and is run by one of Don’s grandsons. Don was unable to finish high school due to caring for his parents. Later in life he was awarded an honorary diploma by Orrville High School in recognition of his accomplishments.
Don was a member of Orrville Christian & Missionary Alliance Church and the Baughman Grange. He was known as a hard worker and someone who was always willing to help anyone in need. It was not unusual for someone who needed help to live at the Caskey home. Although many things kept him busy, he found time to enjoy the game of softball. He was a desired player in the Orrville fast pitch softball league, pitching for many different teams. One of his greatest joys in life were his many grandchildren who often found him with a sweet treat in his pocket for them. If you knew Don, you often heard him say “The Good Lord has been good to us” and that is who he would give the credit for his many blessings.
Surviving are his wife, Beulah Caskey; three sons, James (Cheryl), Timothy (Carolyn), and Jonathan (Sandi) Caskey, all of Orrville; ten grandchildren, Eric (Andrea) Caskey of Orrville, Jason (Olivia) Caskey of Orrville, Stacey (Oliver) Coblentz of Seville, Steven Caskey of Orrville, Rebecca (Eric) Fox of Marshallville, Esther (Michael) Nussbaum of Orrville, Jarrod (Chelsea) Caskey of Orrville, Nathan (Paige) Caskey of Canal Fulton, Rachel Caskey of Orrville, and Hannah Caskey of Orrville; and 16 great-grandchildren.
He was preceded in death by siblings, Ralph, Raymond, Howard Wayne, Melvin, Pauline, Ruth, Della and Evelyn.
Friends may call on July 9, 2020, at Christian and Missionary Alliance Church, 300 S. Walnut St., Orrville, from 4:00 pm to 7:00 pm.
Services will be held at 11:00 am on July 10, 2020, at the C&MA Church, where viewing will be available an hour prior to the service. Burial will take place at the Crown Hill Cemetery in Orrville, where military rites will be observed.
Memorials may be made to Christian and Missionary Alliance Church, 300 S. Walnut St., Orrville, OH, 44667 orrvillecma.org.
Auble Funeral Home in Orrville is handling the arrangements. Online registry and expressions of condolence may be made at the funeral home’s web site at www.aublefuneralhome.com.  Although the public visitation and service is exempt from the current gathering limitations, the risk of virus transmission from one person to another still exists.  Visitors are asked to wear masks if possible, practice social distancing, and adhere to the posted signs and spacing limitations.
Posted in Obituaries