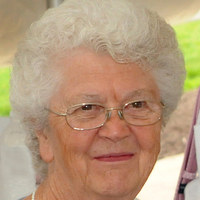 Dorothy was born on May 11, 1932 in Wayne County, Ohio and was the daughter of the late Louis and Elda Amstutz. She was a 1950 graduate of Eastern Mennonite (High) School.

In the immediate family, Dorothy was preceded in death by her husband, James, and grandson Elias Lehman. She had been the last surviving member of her family of origin.

Throughout her adult life she was dedicated to the Lord, her husband, and her children.  She had been a long-time active member at Lindale Mennonite Church where she served the Lord in multiple capacities, from Wayfarer leader to Elder.  Dorothy also volunteered at The International Guest House in Washington DC and Gift & Thrift, Harrisonburg, and was employed at various places of business part time while raising her large family.

A private burial was held on Friday, June 26, 2020 and a memorial service will be held August 8th at 4:00 p.m. at Lindale Mennonite Church, Harrisonburg, VA.

Online condolences may be made at www.mcmullenfh.com.  McMullen Funeral Home is in charge of arrangements.