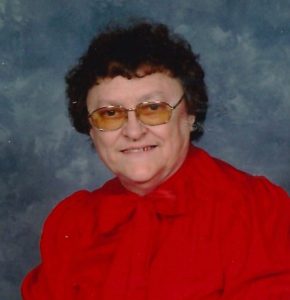 Dorothy L. Hayes, age 87, of Wooster, Ohio, formerly of Mogadore, died on Sunday, August 9, 2020 at the home of her daughter.
She was born on September 12, 1932 in Frankford, West Virginia, the daughter of the late Dwight L. and Gladys L. (nee Graybeal) Boggs.
Dorothy was a homemaker, however, she loved to sew and became an accomplished seamstress, sewing clothes for many people in the area. She loved to cook, garden and can. She was a huge quilter and one year made quilts for everyone in the family for Christmas. She was a world traveler, visiting New Zealand, Australia, Poland and the rest of Europe. Her greatest joy was spending time with her church family, whether it be here in Ohio (Eastwood Church of the Brethren) or in West Virginia (Frankford United Methodist Church).
She was a very devoted mother, grandmother and great-grandmother.
Survivors include her children, Gayle (Dr. James) Hostetler, Paul Hayes and Laura Sue (Richard) Rhodes; her grandchildren, Jeremy (Christi) Hostetler, Joy Hostetler, Jonathan (Heather) Hostetler, Jesse Hostetler, Jamin Hostetler, Johanna (Kevin) Kowalski, Joshua (Breeann) Hayes, Cody (companion, Laura) Hayes, Jason (finance, Ashley) Rhodes and Rhonda (companion, Marc) Rhodes; her many great-grandchildren and one great-great-grandchild on the way.
Her siblings also survive, Mary Lou (Gerald) Bean and Donald (Loretta) Boggs.
Other than her parents, Dorothy was preceded in death by her husband, Robert Lee Hayes on February 15, 2004, they were united in marriage on December 22, 1950; her son, Thomas Lee Hayes; her great-grandson, Milo Lemley; and her sister, Sally Martin.
Funeral services will be held on Monday, August 17, 2020 at 1:00 PM at Newcomer Funeral Home, 131 North Canton Road, Akron, Ohio, where family and friends may visit from 12:00 PM until the time of the service.
We do ask that everyone that will be attending ADHERE to SOCIAL DISTANCING RULES AND WEAR A MASK.
To leave a special message for the family, please visit www.NewcomerAkron.com
Posted in Obituaries