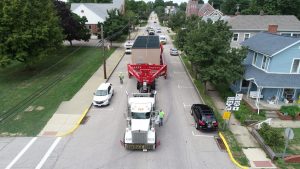 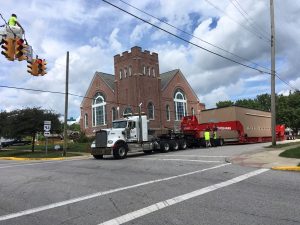 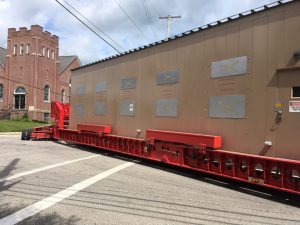 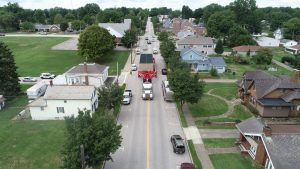 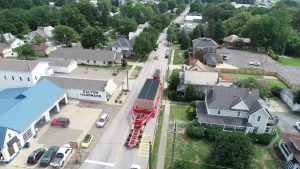 A 155-foot, three-section tractor-trailer carrying a transformer — 20 feet wide and 16 feet high — bound for New Jersey turned some heads Tuesday afternoon as it made its way through downtown Dalton.

Special to The Gazette & News

It can’t replace the cancelled 2020 Dalton Holidays Festival Parade. But the impromptu parade that passed through the village at midday Tuesday did put on a good show for those lucky enough to watch from the sidelines.

The featured unit, weighing a hefty 258,000 pounds, was a 155-foot, three-section tractor-trailer carrying a transformer bound for New Jersey. The transformer, at 20 feet wide and 16 feet high including its low-slung trailer, was the size of a mobile home. Extending the length of its roof and partway down either end were two parallel pipes that helped utility lines “skim over” the huge load as it made its way south on State Route 94 toward US 30.

Leading the parade was an SUV equipped with two tall rooftop “feelers,” antennas marked with heights up to and beyond the 16-foot legal limit for the underside of highway bridges. While there were more direct routes than Dalton from the parade’s origination in Fort Wayne, Indiana, and its east coast destination, some had bridges too low to ensure the six-inch safety clearance beyond the 16 feet. So Marshallville and Dalton joined the parade route from the previous night’s layover in Lodi to get the cargo safely onto Route 30.

Each time the feelers brushed something crossing over the route, as they did when the driver passed under the traffic signals at Church and Main streets in Dalton, electricians following just behind went to work. Men from Perram Electric of Wadsworth positioned their truck so the extended bucket allowed an electrician to gently reposition the signals as the rig passed beneath. Perhaps it was appropriate that, as the driver adeptly maneuvered the rig in a left turn, the bell tower of Dalton United Methodist Church played “Just As I Am” to provide noontime inspiration. With amazing precision he guided the rig so it passed over a few inches of curb and sidewalk along Dalton Presbyterian Church to complete the turn.

Parade colors were provided by flashing blue light bars atop four Ohio State Highway Patrol cruisers. The troopers’ job was to divert traffic in the path of the rig, which takes up both lanes of a two-lane highway like Route 94. At the rear, a trooper signaled a safe following distance for  a garbage truck, a milk hauler and several semis which, unable to pass along 94, became unscheduled (and perhaps unenthusiastic) parade participants. After the rig made its Dalton turn, at least one semi driver knew that turning right would eventually take him back to US 30 rather than staying in the slow parade down Main Street.

No doubt the skilled driver could have made the tight right turn at Village Hall onto Mill Street and then continue south two blocks to Route 30 and the wide but busy 94-30 intersection. But someone in the lineup had a better idea after contemplating the Main-Mill intersection. Rather than turning, the rig continued east down Main Street to the intersection of US 30. Seeing an escape route at last, the rest of the non-voluntary parade participants took Mill Street south, no doubt hoping to beat the rig if their scheduled trips took them along US 30 east.

Once the rig was out of the village and moving eastward along Route 30, troopers established a rear clearance zone to prevent everything – even motorcycles – from passing the extra-wide rig on the two-lane highway. With Dalton in their rearview mirrors, parade participants had only 500 miles more to go to reach their destination.