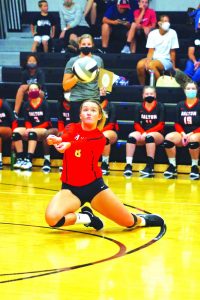 By ARIEL STAHLER
DGKN sports writer
Dalton High School’s varsity volleyball team started the season off with a win over Tuslaw, but then ran into a tough stretch against Hiland, Central Christian School and Orrville. The Lady Dawgs have an overall record of 1-3.

Dalton cruised to a 25-13, 25-15, 25-15 win at Tuslaw in the first contest of the season Aug. 22. The senior Lady Dawgs put in the work against the Mustangs. Adrianne Alger finished with nine points, two aces and 22 assists. Abbi Snyder also had nine points and two aces, in addition to eight digs. Brennah Arnold ended with nine points, one ace, 10 kills, one solo block and one assist block. Tess Denning collected six kills. Landree Siders led with 10 digs.

“It was nice to get in the game against Tuslaw so the girls could get comfortable playing with each other during a regular-paced game compared to just practice,” said Dalton head coach Allison Hostetler.

“Our biggest challenge that we faced during our five-set match against Hiland was just being able to finish a set,” Hostetler said. “We had opportunities in the sets that we lost and we just weren’t able to take advantage of them. We had unforced errors and then it seemed like we were in survival mode instead of being as aggressive as we are capable. These are things that we would rather figure out now and fix at the beginning of the season and I know the girls are willing to put in the work. We want to see the girls come together and work hard to get better every day at practice and constantly push each
other.”

The Comets gave the visiting Lady Dawgs trouble Aug. 27 when Central Christian School took the 25-16, 25-21, 25-22 win. Snyder was the top server with six points and one ace. Siders also had six points, in addition to 13 digs. Weaver led the Lady Dawgs with nine kills. Arnold finished with seven kills and nine digs, while Denning had six kills. Alger dished 25 assists. 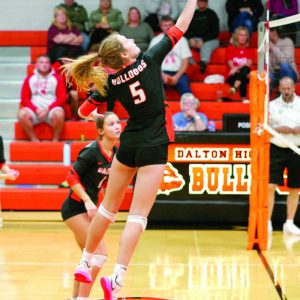 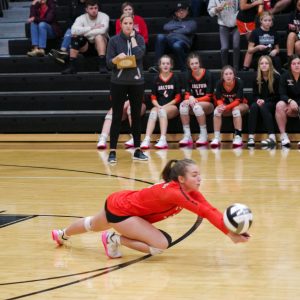 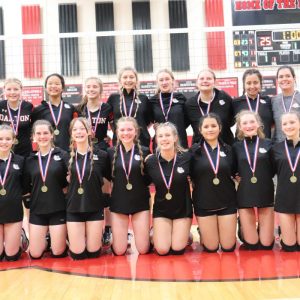 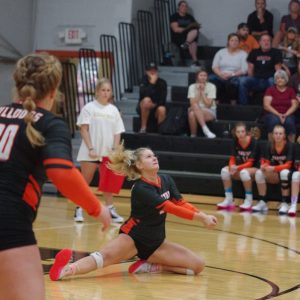