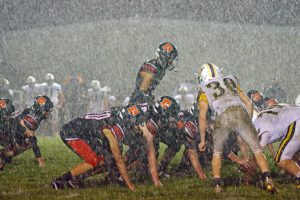 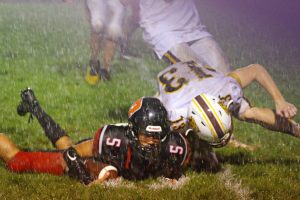 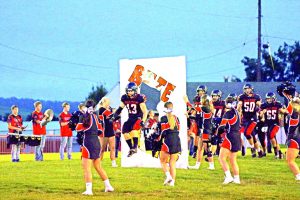 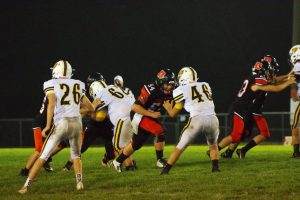 DALTON  The Bulldog football team took the field Friday night, not once, but twice. And after a slow start in a pouring rain, Dalton found its footing and ran right over the visiting Waynedale Golden Bears. A 31-0 victory not only got the season off to a fast start for the Bulldogs, it brought with it a long awaited sense of normality. A weather delayed start to the opening kickoff was followed by a first quarter played in a torrential downpour. Both teams had trouble holding on to the ball and neither offense could move the ball effectively.

At the 5:20 mark of the first, Dalton was able to get on the board when the defense sacked Waynedale’s Peyton Lemon in the endzone for a safety and a 2-0 lead. The quarter came to an end and the weather moved in once more.

After a lengthy delay, play resumed shortly after 10 p.m. and the Dawgs soon took over the game. Dalton was unable to score after moving the ball inside the 10 yard line. But after forcing a Waynedale punt, Dalton quarterback Jaiden Malone (23 carries, 95 yards, 2 TD) scored the first touchdown of the young season when he went around the left end and sprinted 26 yards to paydirt. A two point conversion put the Dawgs up 10-0 with 9:54 to go in the half.

The two teams traded turnovers on the ensuing possessions. Dalton made the Bears pay for their mistakes, however, when Senior Adam Jarrett stepped in front of a Lemon pass and returned the interception 65 yards giving the Bulldogs a 17-0 lead going into halftime.

The second half brought a heavy dose of Tate Geiser with it. The junior running back (22 carries, 159 yards, 1 TD) helped Dalton control the ball and the clock, and eventually put the game away. Geiser’s efforts did not go unnoticed by head coach Broc Dial.

“He practices with a purpose,” Dial said of Geiser. “He has a really good work ethic and wants to do well.”

Throughout the second half, Geiser’s purpose and effort were on display as he repeatedly punished Waynedale defenders. His lone touchdown on night came with 48 seconds remaining in the third quarter, pushing Dalton’s lead to 24-0 heading into the final 12 minutes of play.

Dalton’s defense dealt out some punishment of their own, limiting the Golden Bears to just a single first down and only 31 total yards. Waynedale was forced to punt throughout the second half and the Dalton offense did the rest.

Malone added a second score, this time on a 17 yard run, halfway through the fourth quarter. The 31-0 lead would hold up, and the Dawgs walked away with a well deserved victory to start the 2020 campaign.

Perhaps this fall will look unlike any season we have witnessed before. There are going to be mandates and conditions to follow, and there will certainly be frustration on many levels. However, for young people to play and to do what young people do brings a sense of relief and joy. The Dalton football team did just that, and if Friday night was an indication of things to come, there will be joy and reason to celebrate for weeks to come.