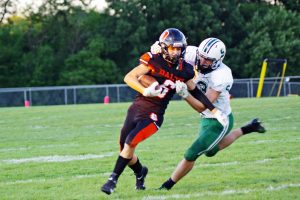 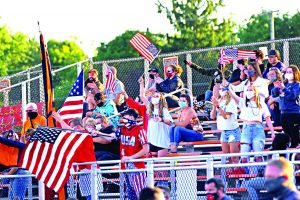 This year, the teams entered the game both owning 1-0 records, both looking to take control of the WCAL, and both still in possession of their key weapons, Malone and Keener.

Unfortunately for the Smithies, Dalton also had in its arsenal a smothering defense that turned the hype into a lopsided affair. In the end, Dalton posted a 35-8 victory and showcased why the expectations for this year’s team are so high.

Keener found the yards hard to come by. Dalton held the explosive back to 67 yards on 24 carries. And with each touch, a host of Dalton defenders were in on the tackle.

“Keener is a very good back,” Dalton coach Broc Dial said after the game. “We stressed (defensive) pursuit this week and we needed multiple players to get to the ball.”

Dalton’s defense was on point all night. Smithville ended the game with just 134 yards of total offense, 50 of which came on the final drive of the game.

Meanwhile, Malone was as advertised. The junior signal caller accounted for 240 yards of offense. When he wasn’t keeping the ball himself (17 carries, 111 yards, 2 touchdowns), he was finding open receivers, completing 11 of 16 passes for 129 yards. His lone passing touchdown came on a 4th and 5 play when he found senior receiver Dillon Horst for a 38 yard completion and score.