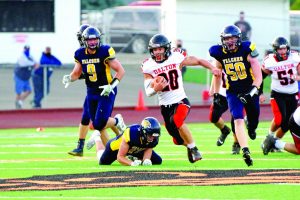 Dalton’s Tate Geiser finds room to run in Friday’s game against Hillsdale. The Bulldogs won to improve to 3-0 on the season. 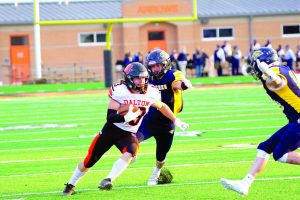 ASHLAND  Few will argue that the 2020 version of the Dalton football team is good. Many may even say this team is very good. Is this team great? That all depends on perspective. And coach Broc Dial knows that if his squad wants to be a championship caliber team, their focus must be on execution and effort.

After defeating Hillsdale 33-20 Friday night in Ashland, Dalton improved its record to 3-0. With only three games left in the shortened regular season, the Bulldogs have established themselves as contenders for the WCAL crown. That championship will not come easy, however.

“Defensively, we are close,” Dial said after the game. “Offensively and on special teams we need to improve. Our execution needs to improve in those two phases. And that starts with me.”
The Dawgs defense held the line Friday night despite giving up two long scoring plays. Hillsdale scored on pass plays of 44 and 30 yards, and each of those touchdowns kept the Falcons within striking distance of Dalton.

The quick strike capability of Dalton’s offense kept Hillsdale at bay, however. Quarterback Jaiden Malone was once again able to carve up a defense, ending the game with three touchdowns (one pass, two run). Most of his damage came on the ground where he accounted for 125 yards on 13 carries. Tate Geiser also punished the Falcon defense to the tune of 121 yards on 19 carries.

In all, four different Bulldogs found the endzone. Senior Adam Jarrett scored from a yard out to cap off a 51 yard opening drive. Dalton pushed its lead to 12-0 early in the second quarter when Jaden Schlabach bullied his way in for a two yard touchdown.

After Hillsdale executed a perfect halfback pass that accounted for their first touchdown of the evening, Malone cushioned the lead when he scored on a 32 yard quarterback keeper. Dalton took the 18-7 lead into halftime.

The Falcons took the second half opening kick and turned it into a 71 yard, five and a half minute drive, capped off by a 30 yard touchdown strike. At 18-14, Hillsdale was very much in the fight. Dalton threw the next punch, however, and regained control of the contest. Owen Beatty (three receptions, 43 yards, one touchdown) took a Malone pass and turned it into a 20-yard touchdown after breaking several would-be Hillsdale tacklers.

Malone put the game away in the fourth quarter, scoring on a 34 yard run. Hillsdale tacked on a touchdown late in the game, but it was too little too late as the Dawgs left Ashland with a 33-20 victory.

Dalton is poised to defend its 2019 WCAL title. To do so, Dial knows that there is work to be done, even after another convincing win.

“We need to play the game (with) a certain reverence and respect,” he said. “We need to develop a championship effort which we define as 2nd, 3rd, and 4th effort.”

That effort and respect, along with the skill it possesses on both sides of the ball, will be key to the Dawgs run at another title.