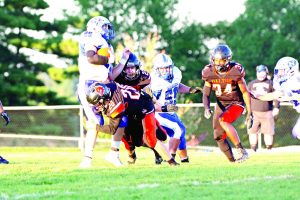 Dalton’s Tate Geiser and Lucas Oswald with the tackle Friday against Northwestern.

DALTON  The numbers just didn’t add up Friday night at Dalton field. On paper, one would presume that the Bulldogs handed the visiting Northwestern Huskies a convincing loss. But numbers don’t lie, even if they can be a bit deceiving.

Offensively, Dalton racked up 376 total yards compared to Northwestern’s 140. In fact, Bulldog running back Tate Geiser outgained the Huskies by himself, rushing for 165 yards on 27 carries. The only number that mattered however, was the final score. Northwestern 7. Dalton 6.

“They made plays at crucial times,” Dalton coach Broc Dial said of the Huskies offense. “You have to give credit to Coach Thut and his team, they made plays.”

Several of those plays came from the defensive side of the ball. Dalton drove deep into Northwestern territory on many occasions, only to be turned away without scoring. Dalton turned the ball over three times after moving the ball inside the Husky 15 yard line. A fourth opportunity to score came at the end of the first half when receiver Dillon Horst (6 receptions, 66 yards) was forced out of the back of the endzone to negate another scoring chance.

Neither team was able to get on the board in the first half. Northwestern, led by quarterback Ethan Siders (94 passing yards, 27 rushing yards) struck first in the third quarter. After a 57 yard drive, Husky running back Hal Huber finally broke the 0-0 tie, giving Northwestern a 7-0 lead.

With 4:13 left in the game, Geiser pushed his way into the endzone from five yards out. An unsuccessful 2 point conversion allowed Northwestern to maintain a 7-6 advantage.

Dalton’s defense forced the Huskies to punt on the ensuing possession, and with just 2:31 remaining in the game, the Bulldogs started their drive from Northwestern’s 47 yard line. However, Dalton was stopped on a 4th and 8 play, and the Huskies took over the ball with 1:30 remaining. The rest was academic, as Northwestern ran the clock out and escaped Dalton with the narrowest of victories.

The unexpected loss ended a 12 game WCAL winning streak for the Bulldogs. A conference title is still a possibility for Dial and his team.
“We need to learn from our mistakes and move forward. We really have two choices: get better or blame and complain.” 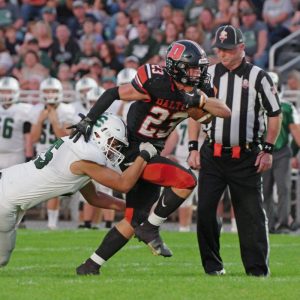 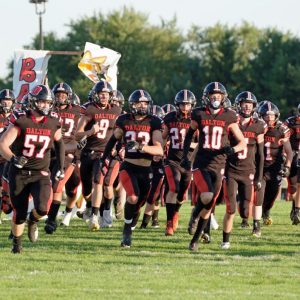 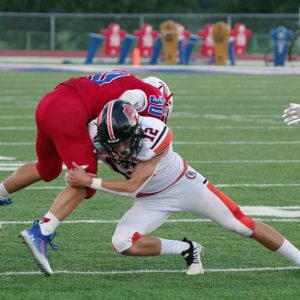 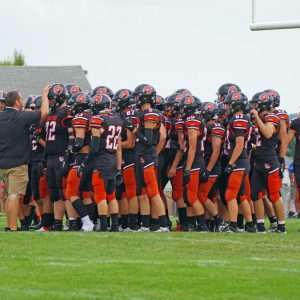 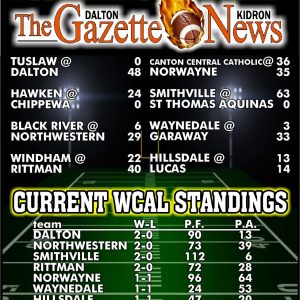