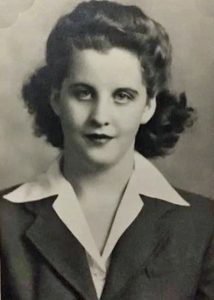 MOUNT HOPE – LaVonne Rose Rothacher, lovingly known as “Gummy” to family and friends, died Saturday, September 26, 2020 at the age of 92.  She was surrounded by her family.

LaVonne was born in Massillon, Ohio on December 2, 1927 to Harry and Leona (Seibold) Reed and grew up on her family’s farm near Mount Eaton, Ohio.  She graduated from Mount Eaton High School.  On November 9, 1952, she married Donald Rothacher and moved to Mount Hope where she lived for the next 68 years.

LaVonne was a homemaker who worked part time as a postal clerk.  She served as a poll worker for the board of elections for many years and was a lifelong democrat.  She was a member of St. John’s Lutheran Church in Mount Hope.

Her family will remember her as a hat model who hated birds and who knitted blankets and socks and loved word searches, pies, cheese, and root beer.  Gummy will be remembered as a helper who selflessly gave to others.  She was a keeper of the small trinkets in life that are often lost – antique purses, a glass vase, and tatted handkerchiefs.  She made her grandchildren cinnamon toast, fed them peaches and pears that she canned in summer, and prepared the couch with cool sheets when someone was sick.

She was a smile.  She was what love should live up to every day.

She was preceded in death by her husband Don known to all who loved him as “Guppy,” her sister, Marie Hofacre; and her sister-in-law, Darline Hoff.

A private memorial service is being held by her family.  Spidell Funeral Home in Mount Eaton is handling the arrangements.

Memorial contributions may be made to LifeCare Hospice of Wooster, St. John’s Lutheran Church or the Holmes County Democratic Party.

To honor her memory, please vote on November 3rd to save democracy.