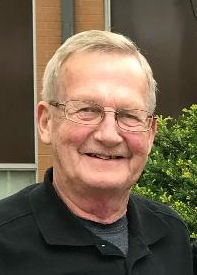 Orrville — Roger Allen Shaffer, age 69, of Orrville, died Sunday, September 27, 2020, at his home, following a three month battle with cancer.
Roger was born on May 18, 1951, in Wooster, to the late George and Jeannette (Wagner) Shaffer, graduated from Smithville High School in 1969, and served as a Private 2nd Class in the United States Army during the Vietnam War.  He married Margaret Schmotzer on August 5, 1995, at St. Michael’s UCC in Marshallville. Margaret survives.
He was a co-founder of Marshallville Auto Clinic and later worked in maintenance for Volvo GM, Armstrong Drilling, and Alfe Heat Treating.  He most recently worked for The Inn at CoalRidge in Wadsworth.
Roger was a member of St. Michael’s United Church of Christ in Marshallville and a proud 44 year member of the American Legion, Post 718, in Marshallville where he formerly served as the Post Commander. He loved his family, was strong in his convictions, and could fix just about anything.
Surviving in addition to his wife are three children, Elliott Ryan (Jennica) Shaffer of NC, Nathan Allen Shaffer of NC, and Nicole Mary Shaffer of Orrville; two grandchildren, Alexander Ryan and Ezekiel Adam Shaffer; three sisters, Marilyn Hardgrove of Marshallville, Sandy (Larry) Stutzman of Smithville, and Shirley (Sam) Sheller of Orrville; and numerous nieces and nephews.
He was preceded in death by brothers, Donald, Charles and Rex Shaffer.
Friends may call on Thursday, October 1, 2020, at Auble Funeral Home, 512 East Oak Street, Orrville, from 6:00 pm to 8:00 pm.
Services will be held at 10:30 am on Friday, at St. Michael’s United Church of Christ, 22 East Euclid Street, Marshallville, with Pastor Joe Routh officiating. Burial will take place at the St. Michael’s Cemetery in Marshallville, where military rites will be observed.
The family has chosen to have a public event. Although funeral events are exempt from current gathering limitations, the risk of virus transmission from one person to another is much higher at a public event.  Visitors are asked to wear masks, practice social distancing, and adhere to the posted signs and spacing limitations. Seating may be limited.
Memorials may be made to American Legion Post 718,  7 S. Main Street, Marshallville, OH 44645 .
Online registry and expressions of condolence may be made at www.aublefuneralhome.com.
Posted in Obituaries