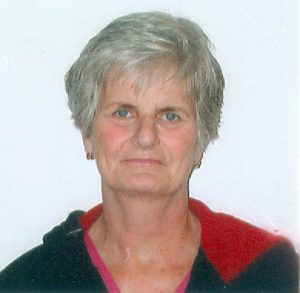 Orrville — Rebecca J. “Becky” Bacher, age 75, of Orrville, left here to be with the Lord on Saturday, September 26, 2020, at Ohio’s Hospice LifeCare in Wooster, following a recent stroke.
Becky was born on June 2, 1945, in Wooster, the daughter of the late Robert and Margaret (Baer) Hartshorn.  She graduated from Waynedale High School in 1963 and later graduated from the Akron Children’s Hospital X-Ray Program.
She moved to California and worked for several prominent doctors in Los Angeles, most notably working for the team physician of the Oakland Raiders. She finished her X-Ray career with 20 years at Wooster Community Hospital, retiring in 2016.
Upon moving back to Orrville, Becky met and married Craig Bacher on July, 14, 1994 in Apple Creek. She enjoyed flying and riding with her husband, and after years of riding on the back of his Harley FL, she bought her own Dyna Wide Glide.  The late Art Lustig was extremely helpful to Becky and her husband with the mechanics of their Harleys.  After 20 years of accident free riding, including a Route 66 road trip, she had a knee replacement and decided to ride no more.
Becky was an active member of the Orrville American Legion Auxiliary and Trinity United Methodist Church in Orrville.  She was also a trap shooter, earning most improved shooter with Dave Maiwurm’s Sharpshooters Trap Team at the Silver Dollar Sportsman Club.
She will be missed by her husband of 26 years, Craig Bacher; cousins, Macia Baer of Ft. Myers, FL, Jim (Gloria) Baer of Mentor, Kevin (Jo) Kralin of Columbus, and Janet Yore of Columbus; two nephews, Tim (Tammi) Hartshorn of Columbus and Mike Hartshorn of Wadsworth and their children; and many friends.
She was preceded in death by siblings, Robert Hartshorn, Margaret Hartshorn, and David C. Hartshorn.
Graveside services will be held at 3:30 PM on Friday, October 2, 2020, at Ohio Western Reserve National Cemetery in Seville, with Dan Shilling and Rev. Dr. David Rittgers officiating. The National Cemetery requires visitors to wear masks and limits attendance to 30 people.  Seating may be limited, so non-family should R.S.V.P. with Auble Funeral Home.
Becky’s husband suggests that in lieu of flowers, donations may be made to Ohio’s Hospice LifeCare, 1900 Akron Road, Wooster, OH, 44691 www.lifecarehospice.org or you may arrange for a tree to be planted in her memory.
Online registry and expressions of condolence may be made at www.aublefuneralhome.com.
Posted in Obituaries