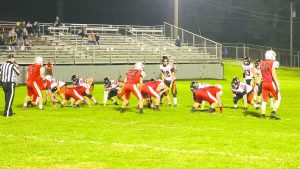 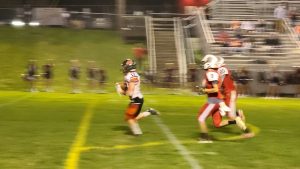 RITTMAN  The Rittman Indians were not gracious hosts Friday night when they welcomed Dalton to their home turf.

The Bulldogs entered the game featuring some newcomers at various offensive positions and for three quarters, the Rittman defense held the Bulldogs in check and were poised to pull off the upset.

Entering the final frame, the Indians held a 7-6 advantage with their only points coming off of a pick six early in the first quarter. Dalton’s first points came late in the third when quarterback Ethan Stutz, making his first start under center on the year, called his own number and ran it in from three yards out after a Mason McCune (4 carries, 44 yards) 37 yard jaunt set the Dawgs up deep inside Rittman territory.

Neither team could sustain any momentum however, and the Dawgs found themselves in a precarious position, trailing late with time running out.

The senior back, aided by a resurgence of the offensive line, shouldered the load and torched the Rittman defense late. Jarrett made the fourth quarter his own highlight reel as he scored on runs of 3, 12, and 37 yards.

Following an ill fated fake punt by the Indians on their own 16 yard line, Jarrett’s 12 yard touchdown run gave Dalton their first lead of the game at 12-7 just eight seconds into the fourth. Rittman answered with a 61 yard drive culminating in a five yard touchdown pass and a 13-12 lead.

Taking over at their own 32, the ensuing Dalton drive was all Jarrett. He accounted for all 68 yards and finished the drive muscling his way into the endzone for a three yard touchdown.

Dalton’s defense answered the bell on Rittman’s next possession. After forcing an incomplete pass on 4th and 10, the game was effectively over as Dalton took over possession with 1:52 remaining in the game and holding onto a 20-13 lead. Jarrett was not finished, however. On the first play of the possession, he took the handoff from Stutz and outran the Indians defense for a 37 yard touchdown putting to rest any doubt as to the outcome of the contest.

Despite Dalton’s offensive struggle for the first three quarters of the game, they put it into gear when it counted most. And while three of Dalton’s offensive starters were not on the field, the boys stepped up, fought admirably, and put themselves in a position to battle for another WCAL crown.

They will now turn their focus to a 5-0 Norwayne squad that sits between them and a share of the county championship. As it should, the season comes down to a final game.