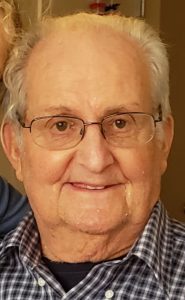 He was born November 15, 1928 in Elida, Ohio to William and Anna Hartman. He married Rhoda A. Yoder on November 9, 1950 at Pike Mennonite Church, Elida, Ohio and she survives.

Bob graduated from Elida High School. During the Korean War, he served at Wooster Community Hospital for two years in lieu of military service. After his service, he worked at Kidron Electric, Inc. for 47 years as a plumber, retiring in 2001.

Bob was a life-long member of Pleasant View Mennonite Church in North Lawrence. For many years, he led music and enjoyed singing in various music groups. He volunteered at MCC Connections when his health allowed it. Numerous bus trips were enjoyed with his wife and he loved spending time with his family.

He was preceded in death by his parents; two sisters; and two brothers.

Due to COVID-19, there will be no calling hours or services. A private graveside service for immediate family will be held October 21, 2020.

Memorial contributions may be made to MCC Connections, PO Box 19, Kidron 44636.

Spidell Funeral Home is assisting with arrangements. Online registry condolences may be made at www.spidellfuneral.com.