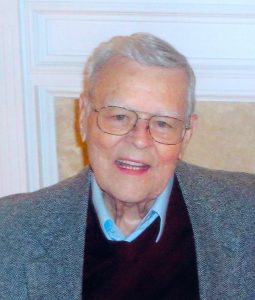 Orrville — Rodney L. Webner, age 89, of Orrville, died Thursday, October 22, 2020, at Ohio’s Hospice LifeCare in Wooster, following a short period of declining health.
Rodney was born on May 30, 1931, in Orrville, to the late Leroy and Mary Lucile (Lambert) Webner, graduated from Orrville High School in 1949, and served in the United States Navy during the Korean War.  He married Nancy J. Bescher on August 1, 1953, at St. Agnes Catholic Church.  While raising their family in Orrville, Rodney graduated from The University of Akron with a Bachelor’s Degree in Business in 1967.
He worked as a Sales Manager of Electronics and Heating Divisions of The Will-Burt Company in Orrville, traveling to China, England, Austrailia, and New Zealand.  He retired in 1996 after 40 years of service.
Rodney was a member of St. Agnes Catholic Church where he served on the church Board and was a member of The Knights of Columbus.  He was a member and Past President of the Orrville Exchange Club, a Founding Member of the Orrville Jaycees Club, served on the Orrville Utilities Board, and formerly served as a Cub Scout Leader.  He enjoyed sailing, golfing, and music, playing as a drummer in his high school band and a dance band.  Most of all he loved spending time with his greatest investment, his family.
Surviving are his wife Nancy B. Webner; four children, Denise (Kim) Lewis of Solon, Cynthia Webner of North Canton, David (Christine) Webner of Avon Lake, and Anne (Scott) Sutton of Brecksville; eight grandchildren, Nathan (Jennifer) Maugel, Sarah (Mike) Lane, Jolynn (William) Radin, Eric (Miranda) Lewis, Bethany (fiancée Neal Driscoll) Lewis, Stephanie (James Jr.) Anter, Megan (fiancée Mike Merick) Webner, and Brian Webner; 10 great grandchildren; and a sister, Mary Sue (Fred) Smith of Galion.
In addition to his parents, he was preceded in death by his daughter, Pamela Webner Adams.
Friends may call on Sunday, October 25, 2020, at Auble Funeral Home, 512 East Oak Street, Orrville, from 6:00 pm to 8:00 pm.
Services will be held at 10:30 am on Monday, at St. Agnes Catholic Church, 541 Spring Street, Orrville, with Pastor Ronald J. Turek officiating. Burial will take place at the Ohio Western Reserve National Cemetery in Rittman, where military rites will be observed.
The family has chosen to have a public event. Although funeral events are exempt from current gathering limitations, the risk of virus transmission from one person to another is much higher at a public event.  Visitors are asked to wear masks, practice social distancing, and adhere to the posted signs and spacing limitations. Seating may be limited.
Memorials may be made to Ohio’s Hospice LifeCare 1900 Akron Road, Wooster, OH, 44691 www.lifecarehospice.org, Orrville Exchange Club P.O. Box 64, Orrville, OH, 44667, or , St. Agnes Catholic Church 541 Spring Street, Orrville, OH, 44667..
Online registry and expressions of condolence may be made at www.aublefuneralhome.com.
Posted in Obituaries