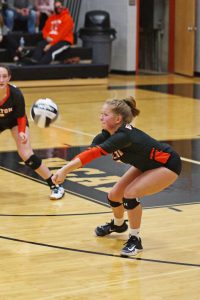 Dalton’s Abbi Snyder Oct. 15 against Waynedale. On Oct. 24, Snyder and Brennah Arnold had 10 points and three aces each against St. Thomas Aquinas.

The OHSAA volleyball tournament looks a little different this year, but Dalton High School is still focused on the same goal. The No. 2 seed Lady Dawgs hosted No. 9 seed St. Thomas Aquinas on Oct. 24 in the Div. IV Northeast 3 sectional final. Dalton won 25-16, 25-14, 25-10 and they now have a 14-8 overall record.
This round would normally be played at Medina High School, but changes to the tournament had the higher seeds hosting.

“It is different this year with not going to Medina for our tournament games,” Dalton head coach Allison Hostetler said. “It is nice to be able to host and to still be playing in our own gym. We just need to make sure we have our tournament mentality with the change of venue.”

“The pace of the game against Aquinas was a little slower, but the girls did a good job settling in and controlling the game,” Hostetler said.

The Lady Dawgs will next host No. 3 seed Loudonville in the district semifinal on Oct. 28 at 6 p.m.

“To prepare for Loudonville, we are going to continue focusing on the small things at practice,” Hostetler said. “One of the things we need to do better when we play Wednesday is serving. We had 10 missed serves against Aquinas, and as the competition gets tougher, the missed serves could be a big factor to the outcome of the game.

The girls just need to stay disciplined, control the pace of the game, focus the whole time and have energy while playing and they will be successful on Wednesday.”