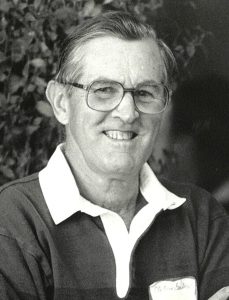 Cletus Gerber, age 99, of Dalton, died on Thursday, November 5, 2020 at his home.
He was born at home in Benville, South of Dalton on September 23, 1921 the late George and Sarah (Amstutz) Gerber.
Cletus received his elementary education from Boone’s School, a one room school covering grades 1-8.  Boone’s school sat on the East side of South Wenger Road, at the junction of Emerson Road near Kidron.  The school was torn down years ago, but the oak tree that stood in the school yard and served as home base for the children’s games still stands.  Cletus graduated from Dalton High, class of 1939.
He chose to serve his country during World War II in Civilian Public Service.  He spent most of his time doing dairy milk testing, based in Hershey, PA.  This was a time when butterfat was considered good and farmers were paid by the quantity and quality of it.  Cletus went on a weekly route arriving at farms near Hershey at milking time.  As milk came into the milk house by pail, Cletus would take a sample and later test all samples at his workplace.  Since this was before computers, the data was written by hand on paper.
On July 3, 1943, Cletus married Martha Jane Myers.  When the war was over and Cletus was released, he and Martha Jane returned to Ohio and lived within or near Benville.  Cletus helped his father with butchering.  He raised beef cattle and helped his brother, Vernon, transport chickens.  He also helped his brother, Harley, with the start-up of the feed mill.  Martha Jane died on January 13, 1987.  On November 24, 1990, Cletus married Eletha (Lee) Tufts/Elrick.
In 1997 Cletus finished compiling a book and had it published.  It was called “The History and Genealogy of Benville, Ohio”.  It is the story of Cletus’ family dating back to his great grandfather, Ben Amstutz, whom he remembered.  Ben came to the United States with his parents, four brothers and one sister from Switzerland in 1871, as an eighteen-year-old.  Ben married here and raised a family.  As his children grew up and married, Ben gave each couple a small piece of farmland in close proximity to his homestead, hence the name Benville.  Early Benville had a cheese factory, a grocery store and a cider mill.  Family farms grew fruit and vegetables for sale.
Cletus is survived by his wife, Lee; four children, Carolyn (Bob) Fitzwater of Dalton, Gene (Nicole) Gerber of Medford Lakes, NJ, Dr. Randy (Darlene) Gerber of Hilo, HI and Dr. Ted (Beth) Gerber of Dalton; nine grandchildren; fourteen great grandchildren; a step-daughter, Sharie Elrick (Harry Clark) of Burlington, VT; a brother, Harley (Fae) Gerber of Kidron; and many nieces and nephews.
Cletus was preceded in death by his parents; his first wife, Martha Jane; his brother and sister-in-law, Vernon and Paula Gerber; and an infant grandson, Cory Fitzwater.
Cletus was a lifetime member of Salem Mennonite Church in Kidron where he served on several boards and committees.
Private family graveside services will be held in the Salem Mennonite Church Cemetery.  There will be no calling hours.  Spidell Funeral Home in Mount Eaton is handling the arrangements.