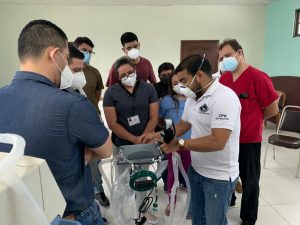 Dr. Eleazar Montalvan, CAMO’s volunteer, training doctors in the use and management of C-Pap machines. 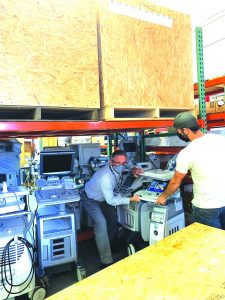 Max Gerber, former owner of Kidron Town & Country, works in the warehouse at CAMO in Orrville.

ORRVILLE  The pandemic has hit most countries hard. But for those already struggling in underdeveloped countries, COVID-19 has made living conditions unbearable.

Central American Medical Outreach, a Christian-based humanitarian organization founded by Kathryn Tschiegg and headquartered in Orrville, has been working since 1993 to fill the gaps of health care, education and community development in Honduras.

Tschiegg, a registered nurse and executive director of CAMO, first began her mission out of a duffel bag in her living room in 1992, according to the website at camo.org. After many years of hard work and establishing relationships, CAMO is now a multi-million dollar international non-profit organization that provides more than 130,000 services to those in need.

CAMO was sought out by the Honduras Ministry of Health and the World Bank to help with the health crisis.

“COVID is real and it’s different in different cultures because of living conditions, medical supplies available, and the overall state of a country,” Tschiegg said.

Because of COVID-19, the boards of CAMO in Honduras and the United States have agreed not to send teams of doctors, dentists, educators or other programs to Honduras with CAMO until June 2021 – at the earliest.

Honduras is a country that needs help more than ever. CAMO is seeking funds and volunteers to assist where they can, and to continue to be ready to help when the pandemic has subsided.

The Central American country, which is slightly larger than the state of Tennessee, is bordered on one side by the Caribbean Sea making it susceptible to hurricanes and floods, according to The World Factbook available through the website for the U.S. Central Intelligence Agency. Honduras has a population of more than 9 million and is considered one of the poorest countries in Latin America.

Tschiegg painted a picture of what life has been like in Honduras. She spent two years there working in a public hospital when she joined the Peace Corps. Before the pandemic hit, she would spend months every year living and working there.  In Honduras, where more than half of the population is unemployed, a family may live on only $400 a month. That’s barely enough to feed a family and pay bills.

When COVID-19 hit, everything shut down through the end of August. Already tight funds were stretched beyond their limits. There was no stimulus package, like in the United States. No school for children. Residents were permitted to leave the house for necessities twice a week.
Extended family members moved in with each other to pool resources, which puts older relatives at greater risk of contracting the virus.

During the day, it’s not uncommon for each meal to consist of not much more than a corn tortilla. At night, staying cool is next to impossible when sharing a twin bed with two or three other people. Falling asleep is a challenge when the rise and fall of everyone breathing is an erratic pulse in the humid air.

If one family member happens to get coronavirus, others probably will follow suit. If someone falls very sick, they may be able to seek attention at a hospital if they live in an area where CAMO is working.

According to www.camo. org, “Hospital Regional de Occidente (HRO) is the largest hospital in the western hemisphere of Honduras. CAMO’s intervention began in 1993, at which time there was no telephone system, no ventilators for babies or adults, and not a single heart monitor.”

In March, 19 out of the 30 ventilators in the region were ones that had been donated and maintained by CAMO. They pleaded with Tschiegg, even offering transportation with the Honduran presidential airplane, if she could bring more ventilators from the states, but none were available.

The pandemic is very real in Honduras.

As of last month, there are about 50 patients in a COVID ward in CAMO’s hospital in Santa Rosa, Honduras. At one point, 15 people were on ventilators, and 10 were on C-pap machines. To treat all these patients, there are three doctors, one registered nurse, and five nurses’ aides working around the clock.

At the beginning of October, 100 graves were dug in Santa Rosa for poor people. By Oct.18, only two were left.

In September, CAMO signed a contract with the Honduran Ministry of Health and World Bank to support three Honduran states—about 1 million people. With this contract, CAMO will continue to provide education, PPE supplies, and help with COVID.

“The World Bank is a vital source of financial and technical assistance to developing countries around the world,” according to www.worldbank.org.

The World Bank in Honduras has a plan that totals $542.95 million in commitments and includes 11 investment projects. World Bank initiatives support sectors in Honduras such as rural competitiveness, social protection, education, water and food security and disaster risk management, the website states.

This spring, CAMO was able to send a large container full of oxygen tanks, C-pap machines, oxygen concentrators, portable oxygen tanks, pulse oximeters, and more to its warehouse in Santa Rosa de Copan. In a 12-month period, seven containers will be released to Honduras, full of medical and educational supplies.

There is much volunteer work that can be done in CAMO’s warehouse in Orrville to prepare for these shipments. Entering data, sorting donated medical supplies, fixing medical equipment, doing general maintenance, and folding linens are some ways people could help.

“If you can count, you can help!” Tschiegg said.

Two other areas that are top priorities for CAMO, with or without the pandemic, are baby bundles and dental kits, volunteer respiratory therapists and biomedical engineers. Baby bundles include the basic necessities a newborn needs to go home. According to CAMO’s website, “Each day, 18 babies on average are born in the public hospital in Santa Rosa de Copán, Honduras. Many mothers lack funds to pay for proper clothing for their newborn and cannot leave the hospital because they cannot afford the bus home.”

Dental kits are another much-needed service that helps about 26,000 children in Honduras a year. Normally, CAMO sends teams to go into the poorest villages to do basic dental hygiene teaching and dental work.

In a letter sent to constituents in October, Tschiegg wrote, “Without your help, we are looking at a $178,000 deficit by the end of 2020. This will have drained all of our reserves. We need everyone’s help to make sure CAMO USA and Fundacion CAMO Honduras are healthy after this pandemic has subsided.”