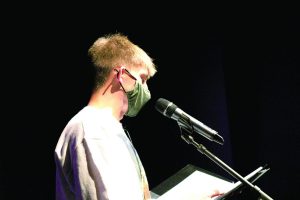 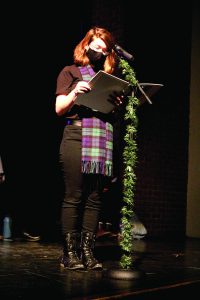 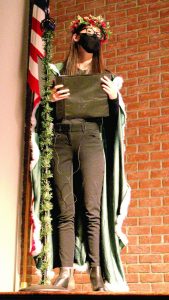 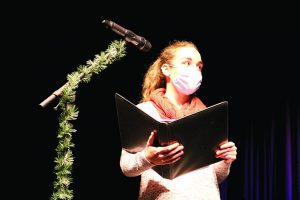 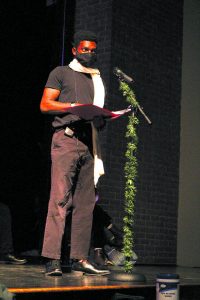 In fact, they’re making themselves heard now more than ever before.

Because of the COVID-19 pandemic, not all Dalton High School theater fans can see the annual fall play in person this Friday and Saturday in the school’s auditorium. Only a limited number of tickets are available. However, tickets for an emailed link of a pre-recorded “A Christmas Carol: A Radio Play” can be purchased.
You can don your comfiest pajamas, grab your hot chocolate and fruitcake – or other seasonal snacks to help get you in the holiday spirit – and enjoy the play from the comfort of your home, or wherever you may be viewing your electronic device. You’re still welcome to give a standing ovation wherever you may be.

At first glance, it seems like the Drama Dawgs may have had an easier production to work on compared to previous years.

That’s certainly not the case – for both this talented cast and crew.

Many people are familiar with the beloved seasonal tale of Charles Dickens’ “A Christmas Carol,” either as a play, movie or book. While the staged radio drama by Philip Grecian appears to be less work in some areas as far as sets, costumes, and props, complications and challenges arise in other areas – such as sound. Crew members who are used to backstage work typically behind the scenes not only have to make themselves be heard in this play, but they also are seen in this play by the audience. Many of the cast members have to adopt voices for two or three characters. And on top of all of that, cast and crew members have to follow Centers for Disease Control and Prevention guidelines and safety protocols.

“I always wanted to do a radio play and now it fits perfectly with the 6-feet social distancing rule,” Director Robin Evans-DelCiappo said in an email. “It makes the actors rely on voice and actual Foley artists (sound effects) are present. I have 29 students involved. All but two are on stage at all times.”
Half of the students are seniors in this year’s fall production, Evans-DelCiappo said.

Senior Angelique Kosier has a unique role as crew chief this year.

“COVID-19 has changed so many things within the rehearsals and performing this year,” Kosier said in an emailed response. “Every rehearsal and soon the performances, as well, we have to stay 6 feet at all times. Which really threw the production for a loop, since there isn’t much interaction between the cast and crew while on stage. We’re mostly standing or sitting, there isn’t any physical acting. All the acting is vocal. And with the crew, usually we’re backstage and unseen, but this year we’re on stage the whole time.”

Senior Anna Maglott plays the part of the Ghost of Christmas Past.

“This year has been hugely different by we have had to adapt to the Covid guidelines and by doing so we came up with a way to still have a performance but follow those guidelines,” she wrote in an email. “Our compromise was a radio play which still lets us act and use characters but only through our voices so that we can maintain 6 feet social distancing.

“I am so looking forward in kind of getting back into the swing of things and the fact that we actually get to have some live performances which is a blessing because I know that not many others are having this opportunity,” Maglott continued. “Probably the most challenging part of the play was having to wear a mask and maintain social distancing. It so easy to want to be close to my fellow performers and it can be hard to connect with them when we are so far away and can’t see each others’ faces, but we have made the best out of a hard situation and doing our best to follow the guidelines to help stop the spread of Covid but still lead pretty normal lives.”

Because of the pandemic, the whole experience of producing a play has been different.

“In the past, I have done costumes and tickets,” senior Ava Martinez wrote in an email. “It is weird this year because I can’t help them choose outfits because I can’t touch them. I also can’t greet people at the door to give them their tickets.”

Skimming production notes of an excerpt of the script at www.dramaticpublish-ing.com, one realizes the young thespians have their work cut out for them. The notes warn those considering the staged radio drama that “Everything depends on sound,” and “the voice must carry it all,” and “try to cast actors who can do multiple voices and accents.”

“We had to research how they made sound effects in the old radio plays and it was very helpful,” Martinez said. “The creaky door was the hardest to find an object for but it worked out in the end.”

Kosier said one of the most challenging parts of the fall play for her is making sure she gets all her sound effects in, on time, and loud enough.

“There are so many, most are spaced out, but there are a few that come one after the other,” Kosier wrote. “With those, I really have to be quick and on my toes so I don’t miss them. As a whole, I think the most challenging part of this fall production is the fact that there isn’t that interaction between the cast. Almost every rehearsal there is the struggle of the cast wanting to face the person they’re talking to, but they can’t.”

What hasn’t changed this year is excitement about the final product. Martinez said she is looking forward to seeing how all their “hard work unfolds.” Kosier agrees.

“I think I’m most looking forward to seeing the final result since this play is very different from what we’d normally put on,” Kosier wrote. “I’m excited to see the play when it’s time to perform and see how everyone has come into their character.”

Evans-DelCiappo explained that only 85 tickets will be sold for each night of the two “in person” performances, which is 15 percent capacity. All tickets are presale only at $10. Last week, tickets were more than halfway sold to students’ families. The link to a pre-recorded show will be provided to those who purchase one digital ticket, which also is $10, and provide their email address. Call the high school office between 8 a.m. and 3 p.m. by Friday to make arrangements with Sharon Kuhlins for payment and pick up (cash or check only) at 330-828-2261, or email her at skuhlins@daltonlocal.org by Thursday so she has time to respond to emails. She will explain how the ticket will be provided and money collected without contact at Door No. 2 outside of the high school. Money raised will cover the cost of securing the rights to perform.

So what object does the crew end up using for the creaky door?

“I guess you will just have to wait and see,” Martinez wrote – and added a smiley face at the end of her emailed response. 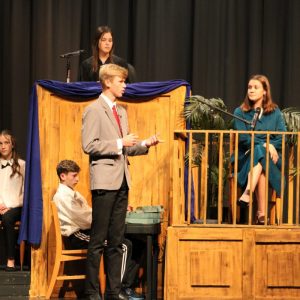 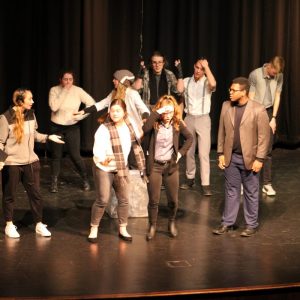 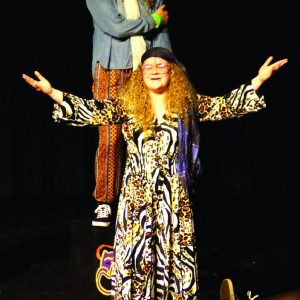