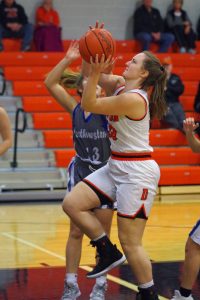 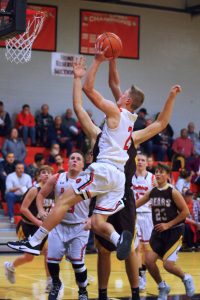 Dalton High School’s boys and girls varsity basketball teams are preparing to take the court and build on their successes from last season.

The Lady Dawgs started the season Nov. 21 at Triway. Dalton lost 50-42. The boys team was scheduled to kick off the season Nov. 27 at Tuslaw, which has been postponed. (This has been updated from the original print version.)

Kaleb Reed, who is in his sophomore season as head coach of the boys team, said his players are working hard in practice. “We are sharpening our skills defensively and learning the new offense we will use for this season,” Reed said.

Dalton girls head coach Katie Miller said her team has been practicing regularly and had three scrimmages to prepare for the season.

For the safety of everyone during the COVID-19 pandemic, both teams will be taking precautions similar to those followed by the volleyball team, such as sanitizing the ball and each player using their own water bottles. Reed said there will be a lot of social distancing and mask wearing among his team. Reed also stated what will be a challenge for his team this year compared to any other season.

“The main difference we will see this season due to COVID-19 is the absence of players,” he said. “We will most likely have players missing from the line-up sporadically throughout the season. This means each player must be ready to step up at any given time.”

Miller said she hopes the team will not be affected from COVID-19 all season, but she cautioned quarantine rules could play a role.

Building on the success of last season, Miller said the program’s goals are to compete for the WCAL title and have a long postseason run. She also has improvements in mind for this season.

“Every year is different from the previous year,” said Miller. “This season, we hope to be a better team in transition and create more fast break opportunities with our defense.”

Reed noted that even though his team tied for first in the WCAL last season, there are plenty of areas for improvement this year. He said improving their offensive and defensive efficiency are the areas of focus for the Dawgs.

The Lady Dawgs graduated many talented players last year, but Miller said the returning players are ready for the challenge of filling the gap.

“A lot of our younger players spent the offseason improving their skills,” said Miller. “The time spent by those in the offseason will help fill the gap left by last year’s seniors.”

The boys team lost four seniors last year and Reed said how much they will be missed.

“They did a good job of coming to practice each day, putting their work in and leading by example,” said Reed. “We had a lot of talented players on our JV squad last season and we will be asking some of those players to step up and fill in for the graduated seniors.”

There are three seniors on the boys team: Dillon Horst, Ezra Miller and Liam Riggenbach. Reed detailed what his team’s short-term goals are for the start of the season. “Our first goal to start the season will always be to start 1-0,” he said. “Throughout the first half of the season, my only goals for the players are to improve each week and to give maximum effort each and every time we step on the court. If we can do those things, I think we will be successful.”

“Control the things we can control and compete to win,” she said. “Stay focused on our team and how we can improve.”