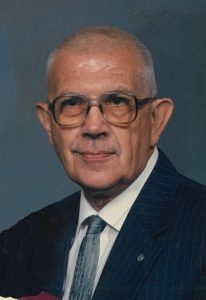 Samuel R. Dodez, 83, of Apple Creek, passed away on Thursday, December 3, 2020 at Shady Lawn Nursing Home in Dalton.
He was born in Apple Creek on April 4, 1937 to the late Frank and Mildred (Wear) Dodez and married Bonnie Nussbaum on June 14, 1959 and she survives.
Sam was an Air Force veteran and retired from OARDC in 1997.  He was a member of the Apple Creek United Methodist Church.
In addition to his wife, Bonnie, he is survived by children, Mark (Amy) Dodez of Orrville, Laurie Dodez of Powell and Scott (Janet) Dodez of Magnolia, TX; grandchildren, Steven Dodez, Adrienne (Matt) Darbyshire and Natalie (Colby) Reeves; great grandchildren, Emma, Ethan and Brooke; and a sister, Mary Lou (Larry) Hackett.
He was preceded in death by a granddaughter, Karrie Dodez
There will be no public services and he will be laid to rest at Westlawn Cemetery in Mount Eaton.  Spidell Funeral Home in Mount Eaton is handling the arrangements.

Memorial contributions may be made to LifeCare Hospice, 1900 Akron Road, Wooster, OH 44691.