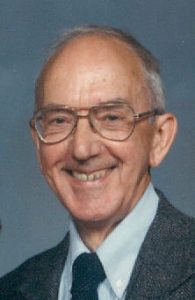 ORRVILLE- Glen Edwin Gerstacker, age 101, of Orrville, formerly of Oberlin, died Thursday, December 3, from a covid related illness at Accord Care Community in Orrville.
Glen was born on January 11, 1919, in Lakewood, Ohio, to the late Edwin and Zouri (Colahan) Gerstacker and graduated from Lakewood High School in 1937.
He served in the US Army from 1942-1946, having served in the Asiatic-Pacific.
He married the love of his life, Kathryn Berg on March 21, 1947, in Henrietta Twp, Lorain County.  Kathryn died on August 10, 2005.
Glen worked for Buildings and Grounds for Oberlin College, retiring in 1983, but music was his true vocation.   He was a piano and organ student of Albert Riemenschneider and could play about any instrument.   In his teens, he made a violin.   He tuned pianos, repaired organs, and played for graduations, community renditions of the Messiah, church choirs, weddings, and funerals in many of the local churches.   He was organist of Henrietta United Church of Christ for 60 years retiring when he was 95. In the earlier years it was a yoked parish involving 2 services a Sunday.
Glen was a member of the former Henrietta United Church of Christ in Lorain County.  He attended Christ United Church of Christ in Orrville since his move to Orrville in 2014 to live with his daughter.  He was also a member of the Masonic Gibson Lodge in Lakewood.  He enjoyed playing music, farming, and gardening.  He could fix just about anything from tuning piano to fixing clocks.  Glen liked trees and working with wood, anything from splitting logs to carving toys and figures. He will be remembered as the family historian and for his wry sense of humor.
Surviving are two daughters, Grace (Randall) Gehres of Orrville and Ruth (Kenneth) Searles of Medford, WI; five grandchildren, Annaliese (Susannah Dolance) Gehres of Minneapolis, MN, Mark Gehres of Orrville, Paul (Eva) Gehres of London, England, Galen (Corrie) Searles of Medford, WI and Rachel (Bulent) Altan of Playa Vista, CA; five great grandchildren, Logan, Miles, and Blaine Searles and Emilia and Enzo Altan; and several nieces and nephews.
In addition to his wife, Kathryn, he was preceded in death by brothers, Robert and David Gerstacker.
Memorial services will be held at a later date and time.  Burial of ashes will take place at the Brownhelm Cemetery in Vermilion.
Memorials may be made to St. John’s United Christ of Christ, 204 Leonard St, South Amherst, OH, 44001.
Auble Funeral Home in Orrville is assisting with arrangements.  Online registry and expressions of condolence may be made at the funeral home’s web site at www.aublefuneralhome.com
Posted in Obituaries